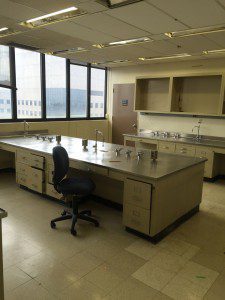 When I becameÂ Peter Palese’s firstÂ Ph.D. student in 1976, his laboratory at Mt. Sinai School of Medicine in New York City was in dire need of shelves. The laboratory benches (pictured) had no room for storing the many bottles of reagents that I was beginning to generate.

When I told Peter that his laboratory needed shelves, he told me to get them. I looked in the yellow pages (there was no internet at the time) and found a dealer in downtown Manhattan. When I told Peter, he responded,Â to my amazement, that he would drive me there to get them.

Within minutes we were in Peter’s car, driving far downtownÂ to a smallÂ garage filled with shelf parts. The proprietor loaded some into Peter’s car and we returned to Mt. Sinai, where we carried the metal pieces up the elevator into the laboratory. There I bolted them together and made one set of shelvingÂ forÂ the low lab bench, and a second set for a higher bench. The photo of Peter shows what the shelves looked like just a few years ago. 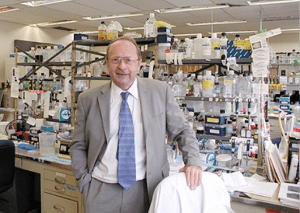 A few days ago Matt Evans, a professor in the same department as Peter, told me that the Palese lab was being renovated and that the shelves that I had builtÂ wereÂ being discarded. He knew that I had made the shelves because I talk about them when I give a seminar. Matt was kind enough to send photos of the shelves, and of the low lab bench on which they once rested. It’s amazing that the shelves lasted for 39Â years!

There is a reason why I’m writing this story, and why I tell it whenever I give a seminar. I had selected Peter to be my Ph.D. mentor, which meant that I listened to him. When he told me to build the shelves, I built them. When I went to David Baltimore’s laboratory as a postdoctoral fellow, I listened to David. When either Peter or David asked me to do something, I did it. IÂ selected them as mentors because they had more experience in virology than I had and I wanted to train with them. Therefore when they asked me to jump, I said, ‘how high’? 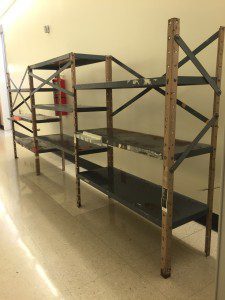 I am not saying that mentors should have the ability to make their trainees do whatever they ask. Of course it is important to question; if you don’t understand why your mentor is asking you to do a specific experiment, by all means ask them! Being an effective trainee means listening and questioning. But remember that in the endÂ they have more experience doing science than you have. If you don’t want to listen, why did you pick them in the first place?

I have been very lucky to have trained many fine virologists during my 33 years at Columbia University. Most have listened to my suggestions. The best have always asked questions, leading to manyÂ wonderful two-way interactions. But some chose to consistently ignore my suggestions for experiments or projects. I have seen similar conductÂ in other laboratories here and elsewhere. This behavior baffles me. To this day, if Peter or David asked me to do something, I would immediately comply. They will always be my mentors. 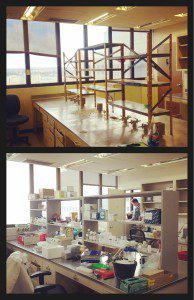 Update: Gayathri, a Ph. D. student in the Palese lab, sent me a before and after photo of theÂ shelves.

This Week in Virology listener Raphael D. Fernandez, M.D. has kindly transcribed my conversation with Dr. Peter Palese that was aired on the podcast on 6 May 2009. You can download the transcript from the show notes page.

Many thanks to Dr. Fernandez for the transcript!