The TWiVstersÂ reveal the puppet master: an RNA virusÂ injected with wasp eggs that paralyzes theÂ ladybugÂ so that she protects the cocoon until the adult emerges.

You can find TWiV #443 at microbe.tv/twiv, or listen below. 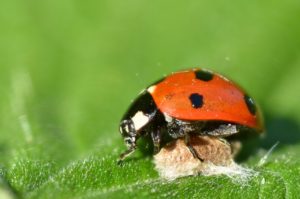 Host behavior alteration by viruses is known to assist the development of another organism. An example is a parasitoid wasp that injects viruses along with eggs into a caterpillar. The viral genomes encode proteins that subvert the caterpillar immune response, allowing the wasp larva to develop. A similar strategy may enable safe development of a wasp byÂ a ladybeetle.

The parasitoid wasp D. coccinellae lays its eggs inside a ladybeetle. After 20 days of larval development, a prepupa emerges from the ladybeetle and fabricates a cocoon between the beetle’s legs. At the same time, the ladybeetle becomes paralyzed. It remains on top of the cocoon (pictured; image credit), protecting it until an adult wasp emerges. Remarkably, some ladybeetles then resumeÂ their normal lives!

Given what we know about how parasitoid viruses can alter the manipulation of their hosts, it was only logical to search for a virus that paralyzesÂ the ladybeetle. Sequencing of RNA from the heads of parasitized ladybeetles revealed the presence of an RNA virus which the authors call D. coccinellae paralysis virus, DcPV.Â The virus is a new member of a Iflaviruses, a family of picornavirus-like, (+) strand RNA viruses that infect insects. DcPV wasÂ found in wasps in Poland, Japan, and The Netherlands, confirming its cosmopolitain nature.

Viral particles were observed in cells lining theÂ wasp oviducts, but not in the lumen. Viral genomes were undetectable in wasp eggs, became more abundant during hatching, and ceased to replicate in adult wasps. The levels of virus in the ladybeetle abdomen and head increase with time to egress, suggesting that it was transmitted from the wasp larvae to the host. In ladybeetles where the wasp egg did not develop, viral replication does not occur.

Insects respond to infection with an RNA-based antiviral response. Components of the RNA based immune system were down-regulated during larval development, possibly by viral proteins, allowing virus to invade the nervous system. Resumption of the antiviral reponse might enable recovery of the ladybeetle after emergenceÂ of the wasp.