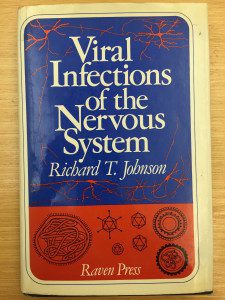 Johns Hopkins Neurovirologist Richard T. Johnson has died, andÂ his obituary at Hub provides a good summary of his career. He had an important influence on my work early in my career.

For me the most valuable chapter was ‘Pathogenesis of CNS Infections’ in which Johnson discussed how viruses move into and within that system. Many of the pages in that chapterÂ are underlined and marked with comments (see photo below). 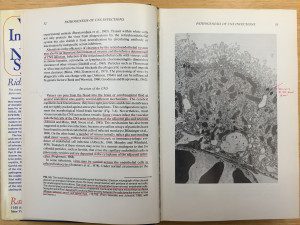 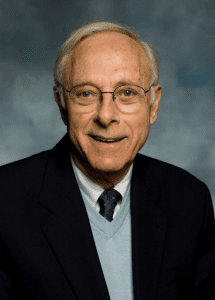 Aaron J. Shatkin was well known for his work on reoviruses beginning in the 1960s in his laboratory at the Roche Institute of Molecular Biology in Nutley, NJ and then at Rutgers University. He was among the first to appreciate that virus particles contained many different enzymes, such as RNA polymerase and poly(A) polymerase,Â that could be readily purified and used to study aspects of the viral replication cycle. His studies of reovirus mRNAs revealed an unusual methylated, blocked 5′-terminal structure, m-7G(5′)ppp(5′)G-MpCp-. He found that the 5′-terminal G of reovirus mRNAs made in purified virions or in infected cells was linked to the second G via a 5′-5′ chemical linkage, not the typical 5′-3′ linkage found in nucleic acids. This structure, soon to be called the cap, was subsequently found on many other viral and cellular mRNAs. His laboratory found that the cap is required for efficient translation of mRNA and also for mRNA stability. His discovery of a protein that binds the cap, now called eIF4E, lead to our understanding of how ribosomes are recruited to mRNAs to initiate protein synthesis. In recent years he became interested in the enzymatic machinery in cells that is responsible for synthesis of the cap structure, the capping enzyme. He studied the role of the capping enzyme in the nematode C. elegans and, in one of his last papers, solved the structure of the protein. 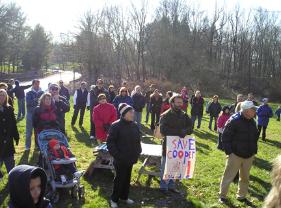 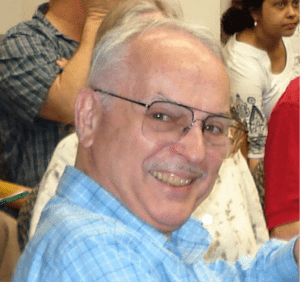 Robert A. Weisberg was a Scientist Emeritus at NCI until the time of his death on 1 September 2011. Previously he was Chief of Microbial Genetics at NICHHD, a position he retired from in 2008. He was aÂ pioneer in the study of the bacteriophage lambda. His research lead to seminal contributions about how bacteriophage lambda integrates into the E. coli chromosome. His laboratory produced the first library of cloned genes, using lambda transducing phages. Weisberg’s work was a combination of biochemical and genetic approaches, and he was an expert in both disciplines.

My colleague Max Gottesman was a good friend of Weisberg and writes:

Bob was a wonderful colleague; he shared freely his innovative ideas with others, had no issues with authorship, and welcomed the success of others â€“ in short, a model citizen/scientist. He leaves behind a substantial scientific legacy that taken together established lambda as a model system for the study of recombination and gene control and an important tool for bacterial genetics. And those who knew him personally feel that he enriched their lives, and that an era has ended with his passing.

Weisberg’s recent review, co-authored with Gottesman, Little lambda, who made thee?, is an excellent review of the virus and its contribution to the field of molecular biology.

Dr. Erlanger had a distinguished career as a biochemist andÂ immunologist, and his research interests were very broad. TheyÂ included developing receptor specific antibodies using an auto-anti-idiotypic strategy, studying nucleic acid structure and conformation,Â investigating microtubule assembly, and developing antibodies toÂ carbon nanotubules and fullerenes. He was an active inventor withÂ over a dozen scientific patents, including patents for the creationÂ and delivery of specific antibodies, detection of HIV, and treatmentÂ of HIV and sickle cell disease. Dr. Erlanger was the recipient of manyÂ scientific awards and honors throughout his career, including aÂ Fulbright Scholarship, a Guggenheim Fellowship, and the TownsendÂ Harris Medal. 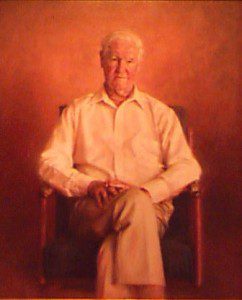 Australian virologist Frank Fenner, MD was born in Ballarat, Victoria in 1914. He earned a Doctor of Medicine in 1942 at the University of Adelaide, and from 1940 – 1946 he worked on the malaria parasiteÂ in Egypt and Papua New Guinea as an officer in the Australian Army Medical Corps. He subsequently began studying the pathogenesis of mousepox virus at the Walter and Eliza Hall Institute of Medical Research in Melbourne. Later he was appointed Professor of Microbiology at the John Curtin School of Medical Research at the Australian National University, where he continued his work on viruses, including myxoma virus. His interest in the balance between virus virulence and host resistance was put to practical use in an effort to control Australia’s rabbit plague through theÂ introduction of myxoma virus.

Dr. Fenner was a co-author ofÂ The Biology of Animal Viruses, first published in 1968. I still have my paperback ‘student’s edition’ which served as my virology bible during my years as a Ph.D. student. Later, when I was developing virology lectures for medical and graduate students, I relied on this book heavily. From the introduction:

During the last twenty years virology has developed into an independent science. It is now growing so rapidly that two new journals of virology were launched this year. Four major works on viruses of vertebrate animals have been published recently….However, none of these books deals in a comprehensive way with the broader biological principles of animal virology, which is the aim of this two-volume work.

The idea of presenting virology as a series of principles, not simply a list of viruses, was novel, and inspired us during the writing ofÂ Principles of Virology many years later. 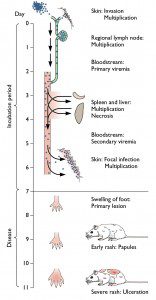 Fenner’s classic studies on mousepox pathogenesis were the ï¬rst to demonstrate how disseminatedÂ viral infections develop from local multiplication to primaryÂ and secondary viremia. In the case of mousepox, after localÂ multiplication in the foot, the host response leads to swellingÂ at the site of inoculation; after viremia, the host response toÂ replication in the skin results in a rash. The figure at left depicting these events is included in Principles of Virology, because the findings serve as a paradigm for many other viral infections.

Fenner was also well known for his work on rabbitpox. European rabbits were introduced into Australia for hunting in 1859, and lacking natural predators, they reproduced to plague proportions.Â The rabbitpoxvirus, myxoma virus, was released in Australia in the 1950s in an attempt to rid the continent of these rabbits.Â In the ï¬rst year, the infection killed the rabbits withÂ a 99.8% mortality rate. By theÂ second year the mortality dropped to 25%, and subsequently theÂ rate of killing was lower than the reproductive rate of the rabbits, ending any hope forÂ 100% eradication of the animals.Â The most important lesson from this incident is that the original idea to eliminate rabbits with a lethal virus was flawed, because powerful selective forces that could not be controlled or anticipated were at work. Fenner published a series of journal articles from 1950-1964 which carefully documented the changes in the virus and the host that occurred during this incident.

For more information on Dr. Fenner, see his interview from June of 2010 in The Australian, and a summary of his career at the Australian National University.

FENNER F, & WOODROOFE GM (1965). CHANGES IN THE VIRULENCE AND ANTIGENIC STRUCTURE OF STRAINS OF MYOMA VIRUS RECOVERED FROM AUSTRALIAN WILD RABBITS BETWEEN 1950 AND 1964. The Australian journal of experimental biology and medical science, 43, 359-70 PMID: 14343496