Brianne returns to the TWiV Gang to discuss the distribution of proteins on the influenza viral genome, and the evolution of myxoma virus that was released in Australia to control the rabbit population. 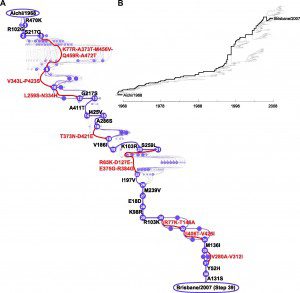 Evolution proceeds by selection of mutants that arise by error-prone duplication of nucleic acid genomes. It is believed that mutations that are selected in a gene are dependent on those that have preceded them, an effect known as epistasis. Analysis of a sequence of changes in the influenza virus nucleoprotein provides clear evidence that stability explains the epistasis observed during evolution of a protein.

Evolutionary biologist John Maynard SmithÂ used an analogy with a word game to explain how epistasis constrains the evolution of a protein. In this game, single letter changes are made to a four letter word to convert it to another valid word:

Although all the intermediates are valid words, the sequence of changes is important. For example, the G in GENE, if introduced into WORD would produce GORD which is not a word. D must be changed to E before W is changed to G. In a similar way mutations in a gene are likely to depend on the changes that have previously taken place.

Whether similar constraints affect protein evolution has been studied with the nucleoprotein (NP) of influenza virus. Between 1968 and 2007, 39 mutations appeared in the NP RNA of influenza virus H3N2. Because sequences of this viral RNA are available each year, it was possible to deduce the order in which these changes appeared in the viral genome (illustrated; figure credit). Plasmids encoding 39 different NP proteins were then constructed which represent viral NP sequences present from 1968 through 2007. All of the NP proteins were found to support similar levels of viral RNA synthesis.

The 39 mutations were then introduced singly into the NP RNA, and RNA synthesis was measured. Three of the altered proteins had large decreases in activity. Their presence also substantially reduced the growth of infectious viruses. However when these NP changes were combined with the amino acid changes that preceded it during evolution, replication was normal. The three NP changes that reduce viral RNA synthesis and replication also decrease the thermal stability of the protein.

These findings show that, from 1968-2007, three amino acid changes were fixed in the influenza virus NP protein whose deleterious effects on protein stability were compensated by previously accumulated changes in the protein. The three amino acids are located in a part of the protein that harbors sequences recognized by T cells. These changes likely allow the virus to escape the host immune response.

Protein stability clearly mediates the epistasis observed in the influenza virus NP protein. It will be important to determine which other protein properties determine the sequence of mutations that are fixed in a viral genome. Influenza viruses are ideal for this workÂ because sequences of all of the viral RNAs are determined for multiple isolates on an annual basis. Studies of what regulates epistasis for other RNA and DNA viruses are also needed to provide an understanding of the constraints of viral evolution. 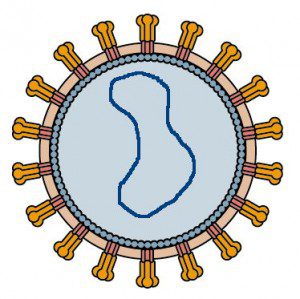 All known virus particles can be placed into one of two general categories: enveloped or non-enveloped. Viruses that fall into the former category are characterized by a lipid membrane derived from the host cell, and one or more nuclecapsid proteins that interact with the viral genome. A virus that infects an archaeal host may constitute a new category of enveloped viruses. It comprises a membrane vesicle that encloses a circular ssDNA genome which is devoid of nucleic acid-binding nucleoproteins.

Examples of enveloped virions that contain nucleoproteins are shown in the figure below. These include influenza virus (left), a simple retrovirus (center), and a togavirus (right).

The influenza virion contains segments of viral RNA bound to four different proteins. Retroviral RNA is bound to a nucleocapsid protein which in turn is enclosed in a capsid, while togavirus RNA is located within an icosahedral shell.

Until recently, it was believed that the genome of all other known enveloped DNA and RNA viruses is always associated with one or more viral proteins. This belief may be changed by the isolation, from a solar saltern in Trapani, Italy, of a virus that infects the archaeal species Halorubrum. Salterns are multi-pond systems in which sea water is evaporated to produce salt. In such hypersaline envrionments, Archaea predominate, and about 20 archaeal viruses have been isolated from these locations.

The virus isolated from the Italian saltern is called Halorubrum pleomorphic virus-1, or HRPV-1. Biochemical analyses of the virion show that it is composed of lipids and two structural proteins, VP3 and VP5. The genome is a circular ssDNA about 7 kb in length with nine open reading frames. The virion architecture is unique: it is composed of a ï¬‚exible membrane (hence the designation pleomorphic) that contains external spikes of the VP4 protein, and is lined on the interior with VP3. The viral DNA is apparently not bound to any proteins in the virions.

At the upper left is my depiction of the appearance of HRPV-1. The diagram was produced by deleting the internal proteins and nucleic acid of a simple retrovirus and replacing these with a ssDNA genome. The HRPV-1 VP4 spikes and the internal VP3 proteins are present, but no proteins are bound to the viral genome. Whether or not the VP4 spikes are oligomeric as shown is unknown.

Most enveloped viruses acquire their lipid membrane by budding from the host cell, and a similar mechanism could account for the formation of HRPV-1 virions. In the absence of a nucleoprotein, it is not clear how the viral genome would be specifically incorporated into the budding envelope. Another condundrum is how the virions would pass through the proteinaceous layer that covers the archaeal host cell.

Whether HRPV-1 is representative of a new kind of virus lacking nucleocapsid protein will be revealed by the study of other pleomorphic enveloped viruses. Candidates include bacterial viruses that infect mycoplasmas, and another pleomorphic haloarchaeal virus isolated from a different Italian saltern, Haloarcula hispanica pleomorphic virus 1.