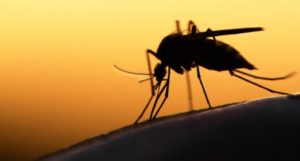 Mosquito saliva, which is injected into the host as a mosquito probes for a blood vessel, contains a collection of chemicals which include anticoagulants to prevent blood clotting, vasodilators to keep blood vessels wide, and anesthetics to prevent us from sensing the mosquito. Saliva also contains components that enhance viral replication, dissemination, and pathogenesis by inducing an inflammatory response that inadvertently promotes infection by providing new cell targets for infection (paper link).

How does mosquito saliva enhance virus replication and dissemination? Part of the story is that as theÂ mosquito probes for a blood vessel, it causes damage that leads to vascular leakage and accumulation of fluid (edema) which inhibits movement of virus to draining lymph nodes.

But delaying dissemination of virus alone does not promote infection and disease. Mosquito bites cause an infiltration of neutrophils (a type of white blood cell) into the bite site.Â The edema at the bite site is enhanced by neutrophils, because depleting these cells from mice greatly reduced edema. This depletion also returned viremia to levels observed in unbitten control mice, and restored dissemination of virus to draining lymph nodes.Â NeutrophilsÂ are not susceptible to infection with Semliki Forest virus, and therefore cannot explain the increase in virus replication at the bite site.

Enhanced virus replication in the skin occurs because the neutrophils elaborate chemokines that attract macrophages, whichÂ can be infected by Semliki Forest virus and Bunyamwera virus. One of the chemokines produced by neutrophils that is a macrophage attractant – CCL2 – binds a receptor on macrophages. Mice lacking the gene encoding the CCL2 receptor are protected from bite enhancement of Semliki Forest virus enhancement.

When a mosquito bites a host, itÂ delivers saliva along with a virus. The saliva induces an inflammatory response and attracts neutrophils into the bite site. The resulting edema holds virus at the bite site until chemokines produced by neutrophils attract macrophages, which are then infected. The virus produced disseminates widely, reaching secondary tissues and causing disease.

It seems likely that the ability to replicate in macrophages that are recruited to the bite site is a property that was selected during evolution of mosquito-transmitted viruses. By replicating in macrophages, the amount of virus in the blood is increased, as well as the likelihood that the virus will be picked up by another mosquito and transmitted to a newÂ host – a powerful selection mechanism. The down side – increased disease in the mammalian host – is an accidental side effect.

Think about that the next time you are scratching that raised bump on your skin caused by a mosquito bite.