On episode #218 of the science show This Week in Virology,Â Vincent, Alan, and Welkin discuss how endogenous retroviruses in mice are held in check by the immune response. 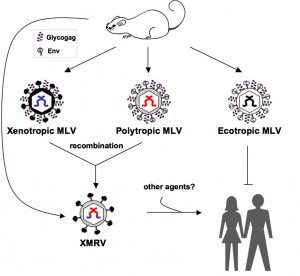 A paper that reported finding retroviral sequences in blood from patients with chronic fatigue syndrome (CFS) has been retracted by the authors. Just four days ago the 2009 Science report of Lombardi and colleagues was editorially retracted. As 2011 comes to an end, so does the hypothesis that retroviruses are etiologic agents of CFS.

Readers of virology blog know that in 2009 Lombardi et al. published a Science report indicating they had detected the new retrovirus XMRV â€“ first detected a few years earlier in prostate tumors â€“ in the blood of a high proportion of patients with chronic fatigue syndrome. Many other laboratories attempted to reproduce this finding, but none were successful.

The next year Alter and colleagues reported finding retroviral sequences in the blood of a substantial number of CFS patients. No viruses were isolated in the Alter study; viral sequences were obtained by polymerase chain reaction (PCR). The viral sequences were not XMRV, but were closely related to endogenous retroviruses of mice called polytropic murine leukemia viruses. (Polytropic means the viruses can infect many species, including mice; xenotropic means that the viruses, though originating in mice, only infect non-mouse species).

The Lo-Alter finding was viewed by many (including myself) as supporting the findings of Lombardi et al., but upon closer inspection it became apparent that they only clouded the situation. The viral sequences reported in the Alter study were not XMRV, and it was not clear why CFS would be caused by such a diverse range of viruses. A second report in 2011 reported MLV-like sequences in a CFS cohort but many other studies failed to find any kind of retrovirus in the blood of CFS patients.

Earlier this year it became clear that XMRV is a laboratory-generated recombinant murine retrovirus: it arose during the passage of a prostate tumor in nude mice in the early 1990s. This finding made it highly unlikely that the virus could be associated with human disease. Lombardi and colleagues then retractedÂ part of the 2009 Science paper that reported viral nucleic acid sequence; they noted that their samples were contaminated with XMRV plasmids. What remained of the paper were serological and virus culture experiments that were not specific for XMRV. Last week the remainder of this paper was editorially retracted by Science.

That left the Lo-Alter findings. The first warning came from the observation made by several laboratories that reagents used to carry out PCR are often contaminated with mouse DNA (an example is Singhâ€™s study). The presence of this adventitious DNA can lead to detection of MLV-like sequences that resemble those found in the Lo-Alter study. The implication was clear: the Lo-Alter findings were wrong, a result of contamination of PCR reagents with mouse DNA.

More doubt came from a report of the Blood XMRV Scientific Working Group, which was assembled to determine if XMRV constituted a threat to the blood supply. In this study, sets of coded samples previously shown to be XMRV positive, as well as samples from healthy controls, were blinded and provided to 9 laboratories for analysis by PCR, virus culture, and serology. Two laboratories reported evidence of XMRV in the coded samples. Only the Whittemore-Peterson Institute identified positive specimens by PCR: two from negative controls, and one from a CFS patient. The Lo laboratory did not detect any positives by PCR, using the same nested assay that they had previously reported in their PNAS paper. The samples tested included 5 specimens that were positive in the Lo-Alter study.

The retraction of the Lo-Alter PNAS paper curiously begins with the assertion that the authors could not detect contaminating mouse DNA in their samples â€“ which was most certainly present and lead to their detection of MLV-like sequences.

This failure remains puzzling and unexplained; but as they report in the next paragraph, they appear to have run out of material to distribute to other laboratories for â€˜independent confirmationâ€™.

The authors provide three additional reasons why they are retracting this paper. They note that no one has been able to reproduce their findings, including the Blood XMRV Scientific Working Group. They have not been able to find (along with collaborators) anti-XMRV antibody, XMRV virions, or viral integration sites in patient samples. Finally, they mention their finding from the PNAS paper that a second set of samples taken 15 years later from the same CFS patients also were positive for MLV-like viruses. Phylogenetic analyses revealed that these sequences were clearly not descendants of the original strains. The sequence data used to make this conclusion were available for the PNAS publication, so it is not clear why this evolutionary incompatibility was not noted previously.

…in consideration of the aggregate data from our own laboratory and that of others, it is our current view that the association of murine gamma retroviruses with CFS has not withstood the test of time or of independent verification and that this association is now tenuous. Therefore, we retract the conclusions in our article.

The retraction of the Lombardi et al and Lo-Alter papers erases the published evidence suggesting involvement of a retrovirus with CFS. While it is theoretically possible that CFS has a viral origin, at the moment there are no data in support of a specific viral etiology. Some have suggested that gammaretroviruses related to XMRV might be involved in CFS. But I donâ€™t see how a lab contaminant can point you in the direction of a bona fide etiologic agent. Contaminants cloud our vision, they do not improve it.

In light of these developments, the ongoing Lipkin study (sponsored by theÂ National Institute of Allergy and Infectious Diseases, involving analysis of a coded panel of samples from 150 well-characterized and geographically diverse CFS patients and controls) seemsÂ less compelling. Many laboratories have failed to find any retrovirus in CFS patients, and the two papers central to this hypothesis have been retracted. Will results from one laboratory clear the matter up further? Whatever the Lipkin study finds, it will have to be validated by others – because we trust science, not scientists.

Update: The retraction has been published at PNAS.

On episode 98 of the podcast This Week in Virology, Vincent, Alan, and Rich review the finding of murine leukemia virus-related sequences in the blood of CFS patients and healthy donors, laboratory inventories for wild poliovirus containment, weaving high-performance viral batteries into fabric for the military, and a case of human rabies in Indiana.