In a highly publicized press release dated May 18, 2020, the biotech company Moderna announced preliminary results from a phase I clinical trial for a SARS-CoV-2 vaccine candidate. However, the company only provided brief, conclusory statements at that time. On July 14, the results from the trial were finally published in the New England Journal of Medicine.

The vaccine candidate is named “mRNA-1273” because it consists of an mRNA (messenger RNA) that encodes the full length, 1,273 amino acid SARS-CoV-2 spike protein. The mRNA is encapsulated in a lipid nanoparticle, which protects the mRNA from degradation and ensures proper delivery into cells. Upon injection into a vaccine recipient, the mRNA would enter cells and be translated by the host protein synthesis machinery into the SARS-CoV-2 spike protein, which would then serve as an antigen to promote an immune response. The spike protein has been the primary antigenic choice for a number of SARS-CoV-2 vaccine candidates because it mediates binding of the virus to the ACE2 host cell receptor via its receptor-binding domain (RBD) and fusion of the viral particle with the host cell membrane via its fusion domain. Both of these domains are highly immunogenic and are targeted by neutralizing antibodies, which bind viral antigens to inactivate virus and prevent infection of new cells.

Phase I clinical trials typically involve a small group of patients and aim to identify which dose of a new drug produces optimal outcomes with the fewest side effects. The Moderna trial enrolled 45 healthy adults, ranging in age from 18-55. Vaccine recipients were divided into three groups, with individuals in each group receiving a dose of either 25, 100, or 250 micrograms of mRNA-1273 in two injections spaced 28 days apart. The key observations were as follows:

Overall these results seem promising; mRNA-1273 activated both arms of the adaptive immune response by inducing both neutralizing antibody and T cell responses specific to the SARS-CoV-2 spike protein RBD and fusion domains. Moreover, because the mRNA encodes the full-length spike protein, vaccine recipients may also produce non-neutralizing antibodies specific to additional potentially immunogenic domains. As noted by immunologist Jon Yewdell in a recent letter to TWiV, non-receptor-binding domains may not mediate classic neutralization of virus in an vitro scenario, but they may provide additional protection in infected individuals. For example, flu studies in mice have shown that non-neutralizing antibodies may also protect against disease by various mechanisms that have yet to be identified. Furthermore, RNA-based vaccines are considered safer than traditional vaccines because they don’t contain infectious virus. They are particularly suitable for emerging pathogens because they can be produced more quickly and cost-effectively than traditional vaccines.

However, the trial also had several limitations. The study group was small and the vaccine was not tested in subjects over the age of 55, a group who often mount a weaker immune response and are more likely to develop severe COVID-19. At the present time it is also impossible to know how long the observed immune responses will last because it has been less than two months since the trial participants were immunized. Because SARS-CoV-2 is considered a dangerous pathogen, traditional challenge trials, in which an immunized individual is intentionally infected with the pathogen against which he was immunized, will likely not be done, so we have no way of knowing if the vaccine is effective until vaccine recipients have been naturally exposed to the virus. It may also be difficult to know whether a person was exposed. Moreover, because mRNA vaccines have never been licensed for use in humans, there are many unknown factors, such as the potential for unanticipated long-term side effects.

There is no doubt that we are in dire need of a vaccine for SARS-CoV-2. However, a vaccine has to be both safe and effective, two criteria that have repeatedly crippled the development of vaccines for respiratory syncytial virus, herpes simplex virus, hepatitis C virus, and HIV, just to name a few. While the results from the Moderna vaccine trial warrant cautious optimism, it is too early to draw valid conclusions in regard to efficacy and long-term protection. An ongoing placebo-controlled phase II trial evaluating the efficacy of 50 and 100 microgram doses of mRNA-1273 in 600 healthy adults, and an upcoming phase III efficacy trial aiming to evaluate the 100 microgram dose in 30,000 participants, will hopefully provide more definitive answers.

I am very skeptical about the pronouncement this week that a group of scientists plan to engineer cells to resist virus infection.

The initiative is called Genome-Project-write (GP-write) and is composed of an international group of collaborators with the broader goal of designing and assembling a synthetic human genome. The first goal of this consortium, reported in Science (â€œGenome writing project aims to rally scientists around virus-proofing cellsâ€), Time (â€œScientists announce plan to create virus-proof cellsâ€) and many other news sources, is to create human cells that cannot be infected with all known viruses.

Could such virus-proof cells be made, and what would they be used for?

END_OF_DOCUMENT_TOKEN_TO_BE_REPLACED 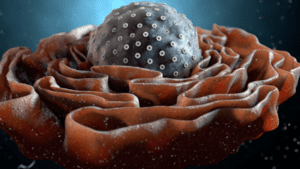 Among the multitudes of eukaryotic viruses with DNA genomes, some replicate in the cell nucleus, while others avoid the nuclear bureaucracy and remain in the cytoplasm. But biology is not always so rigid: a new giant virus has been found that replicates in theÂ cytoplasm, where it seems to recruit components of the nuclear transcription machinery (link to paper).

Noumeavirus was isolated from a pond near – where else? – Noumea airport in New Caledonia. The 200 nanometer icosahedral particles infect the amoeba Acanthamoeba castellani and have a double-stranded DNA genome of 376,207 base pairs encoding 452 proteins. Sequence comparisons revealed Noumeavirus to be a new member of the family Marseilleviridae, which Â includes other previously discovered giant viruses.

Other members of theÂ Marseilleviridae replicate in the cytoplasm of the host cell, so it was assumed that the related Noumeavirus would do the same. However an analysis of the proteins in purified virus particles revealed an absence of components of the transcriptional machinery – which is needed for ths synthesis of mRNA. RNA polymerase, for example, is readily detected in other cytoplasmic viruses such as Mimivirus and poxviruses.

If proteins involved in transcriptionÂ are not present in the Noumeavirus particle, and the virus does not enter the nucleus, how are viral mRNAs produced?Â Â It appears that early in infection, the requiredÂ proteins are moved from the nucleus to sites of viral replication in the cytoplasm. When nuclear proteins were labled with green fluorescent protein, within one hour after infection they can be seen moving out of the nucleus into the cytoplasm toÂ sites of viral replication. The nuclear integrity remains intact, as host DNA does not leave the organelle.Â This recruitment of nuclear proteins is transient: Â after 2-4 hours proteins are no longer leaving the nucleus.

This series of events suggests that nuclear proteins needed to initiate viral mRNA synthesis are recruited from the nucleus to sites of viral replication in the cytoplasm. Once viral mRNAs are made, the viral transcriptional machinery can be assembled and the nuclear proteins are no longer needed. The authors call this ‘remote control of the host nucleus.’

Confirmation of this hypothesis will require the demonstration that nuclear proteins involved in viral mRNA synthesis are recruited to early sites of viral replication in the cytoplasm. It will also be essential to identify the mechanism by which these nuclear proteins are extracted. Perhaps one or more virion proteins, such as an abundant 150 amino acid protein of unknown function, is involved.

Other giant viruses, such as Mimivirus, package the viral transcriptional machinery in the virus particle and are independent of the cell nucleus. At the other extreme are viruses that undergo transcription and DNA synthesis entirely in the nucleus (e.g., herpesviruses). Perhaps Noumeavirus is a relic of anÂ evolutionary transition between the two replication strategies.

You can find TWiV #432 at microbe.tv/twiv, or listen below.

On episode #349 of the science show This Week in Virology,Â Vincent, Alan and Rich explain how to make a functional ribosome with tethered subunits, and review the results of a phase III VSV-vectored Ebolavirus vaccine trial in Guinea.