In this mid-week episode of Earth’s Virology Podcast, we analyze SARS-CoV-2 transmission among youths at a summer camp, adaptation to mice by passage, the importance of T cells for recovery from COVID-19, and listener questions.

Daniel Griffin provides a clinical update on COVID-19, then Ralph Baric joins TWiV to discuss SARS-CoV-2 transmission, vaccines, diagnostic tests, and a new animal model from his laboratory that does not use transgenic mice.

Small animal models (mice, ferrets, hamsters) are essential for understanding how SARS-CoV-2 causes disease and for pre-clinical evaluation of vaccines and antiviral therapeutics. One promising model has been developed by modifying SARS-CoV-2 so that it binds to murine ACE2.

Laboratory mice cannot be infected with SARS-CoV-2 because the viral spike glycoprotein (illustrated) does not bind to murine ACE2, the ortholog of the human receptor. Mice transgenic for the human ACE2 gene, produced after the SARS-CoV outbreak, can be infected with SARS-CoV-2, but the pathogenesis does not resemble that observed in humans. For example, mortality in infected mice appears to be a consequence of replication in the central nervous system, not in the respiratory tract. The altered pathogenesis might be due to improper expression patterns of the ACE2 gene.

In another approach to producing a mouse model for COVID-19, the spike glycoprotein of SARS-CoV-2 was modified so that it efficiently binds murine ACE2 protein. Only two amino acid changes in the S protein were required to allow infection of cells that produce murine ACE2 without affecting reproduction in monkey cells.

Upon intranasal infection of young mice, virus replication was detected in the upper and lower airways and was accompanied by mild to moderate disease. In contrast, after inoculation of older mice, viral replication was not only detected in the upper and lower tract but was associated with lung inflammation and loss of pulmonary function. The age-dependency of disease mimics what is observed in humans.

As a proof of principle, the mouse model was used to evaluate efficacy of a vaccine and antiviral. After vaccination of mice with a Venezuelan equine encephalitis vector carrying the SARS-CoV-2 spike protein gene, reduced virus replication in lung and upper respiratory tract was observed after challenge compared with control mice. Furthermore, prophylactic and therapeutic administration of IFN-lambda-1 reduced virus titers in the lung compared with untreated mice.

This mouse model is attractive because it does not require the development of genetically altered animals. However it is not a perfect model because there are likely differences in tissue distribution of ACE2 in mice and humans which could affect disease outcomes. Whether this difference has an impact on the usefulness of the mouse model remains to be seen. Meanwhile other mouse models are being developed which might have other advantages: for example the production of human ACE2 in mice by using adenovirus-associated virus vectors.

The TWiVologists consider whether to receive an influenza vaccine in August (in the northern hemisphere), and mice implanted with human lung fragments for studying microbial pathogens. 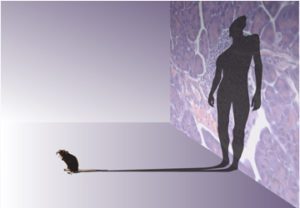 Mice are important animal models for studying human pathogens, but they have limitations: not all human viruses replicate in mice and often these animals do not reproduce aspects of disease and immune responses. Mice implanted with human bone marrow, liver, and thymus (BLT mice) develop human immune systems, but most pathogens infect other cell types. When human lung tissue is introduced into BLT mice, a lung implant develops that is populated with immune cells and can be used to study infection with a variety of human pathogens.

END_OF_DOCUMENT_TOKEN_TO_BE_REPLACED

The TWiV team discusses Medusavirus, isolated from a hot spring in Japan, and induction of neurodegeneration by recurrent herpes simplex virus 1 infection of mice.