Yesterday many US newspapers carried front-page stories on the severity of influenza so far this season. The New York Times story began with “It is not your imagination â€” more people you know are sick this winter, even people who have hadÂ fluÂ shots.” Is this really a bad flu season?

Before we answer that question, I would like to complain about what the Times wrote: ‘more people you know are sick this winter, even people who have had flu shots”. Â A similar sentiment appeared in a recent Forbes column “Influenza-like-illness is sweeping the country with the Centers for Disease Control & Prevention reporting that most areas of the country experiencing high rates. I should know, my family is in the midst of it despite having been vaccinated.”

Remember that having a respiratory illness does not mean that you have influenza – it could be caused by a number of other viruses which of course would not be blocked by influenza vaccine. Furthermore, the influenza vaccine is not 100% effective – it’s about 60-70% effective in individuals younger than 65 years. That’s not great, but it is better than having no vaccine. The point that I want to make is that it is not useful for anyone to relay anecdotal information about immunization and infection unless you know for sure that you had influenza virus. It only further discourages widespread immunization, which is already isn’t where it should be (~40%).

To answer my question Â – is this a bad flu season? – I looked at data from the Centers for Disease Control and Prevention, which receives thousands of respiratory specimens from laboratories throughout the US and determines if they contain influenza virus, and if so, which subtype. Here are the results through week 1 of January 2013:

Pneumonia and influenza mortality has so far not substantially exceeded the epidemic threshold as it has in previous years:

Pediatric deaths from influenza are on track to exceed last year’s total but not the previous two years:

The percentage of outpatient visits for influenza-like illness (based on symptoms, not virus isolation) is following a pattern that resembles recent moderately severe influenza seasons:

The New York City Department of Health and Mental Hygiene also monitors influenza and produces weekly summaries during the season. One metric they report is the percentage of visits for outpatient influenza-like illness. The curve resembles that for 2010-11: 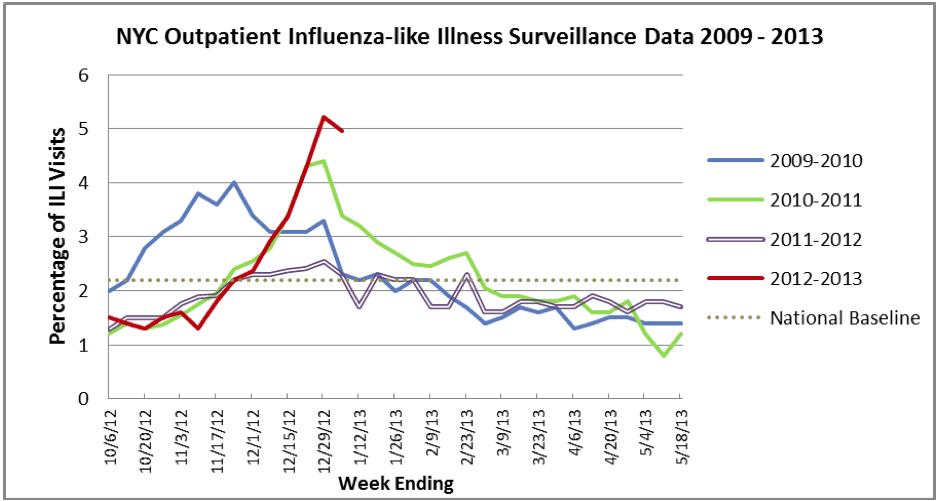 New York City also identifies what type of respiratory virus is associated with influenza-like illness, including influenza viruses, adenovirus, respiratory syncytial virus, parainfluenza virus, and metapneumovirus. For week 1 of 2013 all isolates (n=45) were either influenza A/H3N2 or B, although analysis of about a third of them is pending. In previous weeks a mix of other viruses were found in addition to influenza.

Note also the prevalence of influenza H3N2 this season, which has largely displaced the 2009 pandemic H1N1 strain. The H3N2 subtype is generally associated with more severe influenza seasons.

In summary: the data so far suggest that influenza activity is peaking early than in the past two years, but not at an unprecedented time. Numbers of infections, pneumonia, and mortality, are not off the charts. I would agree withÂ Jean Weinberg, a city health department spokeswoman, who said “This is not a season that is out of the ordinary, though H3 seasons tend to be worse than H1 seasons”.

WHO reports that as of 15 June 2009, 76 countries have officially reported 35, 928 cases of influenza A(H1N1) infection, including 163 deaths. These numbers can be used to calculate a case fatality ratio (CFR) of 0.45%. Is this number an accurate indication of the lethality of influenza?

Determining how many people die from influenza is a tricky business. The main problem is that not every influenza virus infection is confirmed by laboratory testing. For example, early in the Mexico H1N1 outbreak, the apparent CFR was much higher because the total number of infections had not been established. Even with the intense surveillance being conducted at the onset of this pandemic, many infections are still not diagnosed. Virologic surveillance is likely become even more incomplete as health systems become overburdened:

The size of Victoria’s outbreak is now so great that only those most at risk – the elderly, pregnant women and those with other underlying medical conditions – are being tested, resulting in 199 new cases last week.Â “At the moment cases confirmed in the laboratory signify only a small fraction of the cases,” Dr Lester said.Â “It could be three or four times the laboratory confirmed number, but it’s very hard to estimate, given the mild nature of the virus. It is not anywhere near the one in three some have suggested.

So how do we determine how many people are killed by influenza virus?

In fact, the Centers for Disease Control and Prevention of the US does not know exactly how many people die from flu each year. The number has to be estimated using statistical procedures.

There are several reasons why influenza mortality in the US is estimated. States are not required to report to the CDC individual influenza cases, or deaths of people older than the age of 18. Influenza is rarely listed as a cause of death on death certificates, even when people die from influenza-related complications. Many flu-related deaths occur one or two weeks after the initial infection, when influenza can no longer be detected from respiratory samples. Most people who die from influenza-related complications are not given diagnostic tests to detect influenza.

To determine the level of influenza-related mortality, each week, from October to mid-May, the vital statistics offices of 122 cities report the number of death certificates which list pneumonia or influenza as the underlying or cause of death. The percentage of deaths due to pneumonia and influenza are compared with a seasonal baseline and epidemic threshold value determined each week. The seasonal baseline is calculated using statistical procedures using data from the previous five years, and the epidemic threshold is calculated as 1.645 standard deviations above the seasonal baseline. This is the point at which the observed proportion of deaths attributed to pneumonia or influenza becomes significantly higher than would be expected without substantial influenza-related mortality.

This method clearly is not perfect. The rationale is that the ‘excess mortality’ (over the epidemic theshold) is likely to be caused by influenza, but so could at least some of the deaths between the baseline and excess threshold. For example, the pneumonia and influenza deaths are below the epidemic threshold this season, yet we know that people have died from influenza. It also misses deaths caused by influenza, but for one reason or another influenza or pneumonia were not entered on the death certificate.

The answer to this dilemma is more statistics – methods that use the CDC data to estimate the number of deaths caused by influenza. In the paper cited below, the authors calculated an average of 41,400 deaths each year , for the years 1979 – 2001,Â in the US due to influenza. Remember that this is an average, and the actual numbers may vary substantially each year.

To answer the question posed at the beginning of this post: except in well-contained outbreaks in which the number of infected individuals can be determined with precision, the case-fatality ratio is bound to be inaccurate. The use of serological assays to determine the extent of infection, coupled with statistical estimates of influenza mortality, are likely to provide more reliable data.