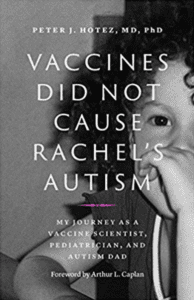 END_OF_DOCUMENT_TOKEN_TO_BE_REPLACED

Vincent and Rich recorded this episode at Vaccines in the 21st Century, a meeting held at the University of California, Irvine, where they spoke with Stacy Schultz-Cherry, Douglas Diekema, and Andrew Noymer about vaccine facts and fiction.

Morbidity and Mortality Weekly Report summarizes a mumps outbreak that occurred in 2011 on a university campus in California:

On September 29, 2011, the California Department of Public Health (CDPH) confirmed by polymerase chain reaction (PCR) three cases of mumps among students recently evaluated at their university’s student health services with symptoms suggestive of mumps. An investigation by CDPH, student health services, and the local health department identified 29 mumps cases. The presumed source patient was an unvaccinated student with a history of recent travel to Western Europe, where mumps is circulating. The student had mumps symptoms >28 days before the onset of symptoms among the patients confirmed on September 29. Recognizing that at least two generations of transmission had occurred before public health authorities were alerted, measles, mumps, and rubella (MMR) vaccine was provided as a control measure. This outbreak demonstrates the potential value of requiring MMR vaccination (including documentation of immunization or other evidence of immunity) before college enrollment, heightened clinical awareness, and timely reporting of suspected mumps patients to public health authorities.

All 29 cases were epidemiologically linked to the university. One of the cases was the source patient’s roommate who had received two doses of MMR (measles, mumps, rubella) vaccine. Other outbreaks of mumps have occurred in populations in which many individuals had received 2 doses of MMR.

CDC suggests that all colleges and universities consider requiring documentation that students have received 2 doses of MMR vaccine before matriculation.

The mumps vaccine was licensed in the US in 1967, resulting in a significant decline in the number of cases. However outbreaks continue to occur, even in immunized populations, when the virus is introduced by overseas travelers.Â The vaccine is included in national health programs of only 62% of countries, and immunization rates have declined inÂ many European countries, leading to outbreaks of measles and mumps.

On episode #207 of the science show This Week in Virology,Â Vincent, Alan, Matt, and Kathy review the use of silk to stabilize antibiotics and a viral vaccine, and an impaired-fidelity vaccine against SARS coronavirus.

If you are not convinced that vaccines are safe, please listen to a conversation between Dr. Ginger Campbell of the Brain Science Podcast and Dr. Paul Offit.

Dr. Offit is a pediatrician who is also Chief of Infectious Diseases and Director of Vaccine Education at the University of Pennsylvania School of Medicine. He is co-developer of the rotavirus vaccine and author of the book Autism’s False Prophets: Bad Science, Risky Medicine, and the Search for a Cure. This book should be read to obtain a complete appreciation of the vaccine-autism controversy. However, I found the podcast also highly compelling, because Dr. Offit is extremely knowledgeable and an excellent speaker.

The furor surrounding childhood vaccines began when Wakefield, a British gastroenterologist, published a Lancet article in 1998 claiming to show a link between the measles-mumps-rubella vaccine (MMR) and development of autism in children. Although the study was flawed, it established a clear question: does MMR cause autism? This question has been addressed in 12 different epidemiological studies involving millions of children who either did or did not receive the vaccine. The answer is quite clear: that vaccine never caused autism. Here are Dr. Offit’s thoughts on this:

The original Wakefield paper has been retracted by 10 of the 13 authors. However, the damage has been done: immunization rates with MMR have dropped in the UK, Europe, and the US. The incidence of measles is increasing and there have been deaths of children from the disease. Deaths that could have been prevented had parents chosen to have their children immunized with MMR. The controversy over MMR has lead the public to distrust all viral and bacterial vaccines, and consequently the incidence of other preventable diseases is rising.

The notion that MMR causes autism was accompanied by safety concerns about thimerosal – a mercury-containingÂ preservativeÂ used in some vaccines to prevent microbial contamination. The results of several large epidemiological studies found no connection between autism and thimerosal. Nevertheless, the preservative was removed from most childhood vaccines – probably an error, according to Dr. Offit, which simply made parents more suspicious. Autism rates have not dropped since the use of thimerosal was discontinued.

Many parents still do not believe the conclusion that vaccines do not cause autism. Part of the problem is that the etiology of autism is not understood. To a parent, the temporal association of immunization with onset of autism is difficult to ignore. Dr. Offit recalls a story which addresses this issue:

…itâ€™s hard to make a statistical argument, or an epidemiological argument, to a parent whoâ€™s seen something thatâ€™s very emotional. Thereâ€™s a story that I tell, because I think itâ€™s a powerful one. My wife is a privately practicing pediatrician in the suburbs. And she was in the office one day and there was a four-month-old sitting on her motherâ€™s lap. And my wife was drawing a vaccine into a syringe that she was about to give this child. Well, while she was drawing the vaccine into a syringe the child had a seizure, and actually went on to have a permanent seizure disorderâ€”epilepsy. And there had been a family history of epilepsy, so she was certainly at risk for that. If my wife had given that vaccine five minutes earlier, I think thereâ€™s no amount of statistical data in the world that would have convinced that mother that anything other than the vaccine caused the seizure, because I think those sort of emotional events are very hard to argue against.

Some have accused Dr. Offit of pandering to the pharmaceutical establishment and enriching himself by publishing Autism’s False Prophets. I don’t think these arguments contain a shred of truth.Â Dr. Offit is donating all the royalties from the boook to autism research. More compelling are his words from the interview:

1Quotations by Dr. Offit are taken from a transcript of his conversation with Dr. Ginger Campbell.