TWiV reviews the six known coronaviruses that infect pigs and what can be learned about human infections, and how the giant Mimivirus DNA genome is organized into a nucleocapsid.

Viruses are universally defined as “obligate intracellular parasites” because they cannot replicate outside of a host cell and depend on that cell and its various metabolic factors for replicating their genome. Based on this definition, most virologists agree that viruses are not alive.

When giant viruses were initially discovered, they were found to violate multiple principles of virology. For example, mimiviruses can be parasitized by small viruses called virophages that can only replicate if they confiscate the replication factors of a co-infecting mimivirus. Because the virophage also inactivates the mimivirus during this process, some interpret this scenario as a virus infecting another virus, a previously unheard-of phenomenon. In turn, mimiviruses have defense mechanisms that inhibit virophage replication, a property that is analogous to eukaryotic anti-viral interferon-mediated defenses. Additionally, mimiviruses encode proteins that participate in protein synthesis – another unusual property for a virus.

Some mimiviruses also have a gene that codes for citrate synthase, an enzyme involved in the Krebs cycle. The Krebs cycle is integral to cellular metabolism in living organisms because it ultimately powers the production of adenosine triphosphate (ATP), the cell’s molecular currency of energy. The cycle takes place in the matrix of the mitochondrion (pictured), where it feeds electrons into a string of complexes in the inner mitochondrial membrane known as an electron transport chain. As electrons move down this chain, they release energy, which is used by membrane-resident enzymes to pump protons from the matrix across the membrane into the intermembrane space (pictured as “proton pump”). This produces a concentration gradient, which is a difference in the concentration of protons on one side of the membrane compared to the other. To achieve equilibrium, the protons move back into the matrix through the action of another membrane resident enzyme called ATP synthase, which captures the energy of the protons to produce ATP. In other words, a concentration gradient across a membrane produces an electrical potential and is usually associated with the ability to generate energy in living cells.

The authors conclude that these findings “position this virus as a form of life.” I disagree with this conclusion for the following reasons. Although P. massiliensis encodes numerous Krebs cycle enzymes, only one of them seems to be functional. Furthermore, P. massiliensis particles did not produce any ATP, meaning that this virus cannot produce its own energy. Even if it did, it still depends on the host cell for many other replication factors, including those needed to make proteins. As long as a virus requires a cell for replication, it is still a virus, and hence not alive.

Still, these findings are interesting and remind me of bacteriophage ϕKZ, a giant virus discussed in a previous post. After infecting a bacterial cell, ϕKZ assembles a nucleus-like shell, which shields the viral DNA from bacterial immune enzymes. Any discovery that reveals genes in viruses that suggest the potential for cell-like functions raises at least a couple of questions. Are these genes remnants of cellular genes, thereby suggesting that these viruses originated from ancient parasitic cells? Or did these giant viruses acquire the genes over time to gain more independence from host cells? Either way, pandoraviruses are aptly named because their study continues to yield surprising discoveries.

From the Fourth Symposium on Giant Virus Biology in Germany, Vincent, Rich, and Nels speak with Assaf, Stephen, and Alexandra about their careers and their work on giant viruses that infect ocean hosts: Emiliana huxleyi, Aureococcus anophagefferans, and a choanoflagellate.

The latest giant virus discovery is Tetraselmis virus 1, which infects green algae. It is unusual because it encodes enzymes involved in fermentation. Green beer, anyone?

END_OF_DOCUMENT_TOKEN_TO_BE_REPLACED

The TWiVumvirate discuss the giant Tupanvirus, with the longest tail in the known virosphere, and dampened STING dependent interferon activation in bats. 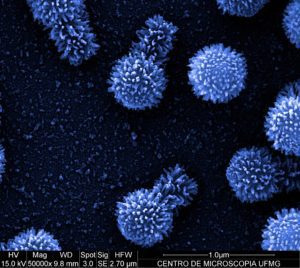 If you know anything about me, you know that Iâ€™m mad about viruses. Although this madness extends to everything viral, I have a peculiar fondness for giant viruses. A new giant virus has been found that not only looks different from all the others, but has an amazing set of genes.