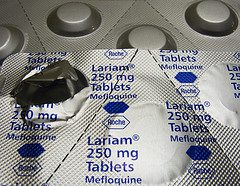 Biogen has announced that an anti-malaria compound may be useful for treating a brain infection, progressive multifocal leukoencephalopathy (PML), that is an adverse effect of the company’s multiple sclerosis/Crohn’s disease drug Tysabri. How does JC virus fit into this story?

Tysabri is the trade name forÂ Natalizumab, a monoclonal antibody against the cellular protein alpha-4 integrin. The antibody was approved by the US Food and Drug Administration for the treatment of multiple sclerosis and Crohn’s disease. Both are autoimmune diseases in which the immune system damages host tissues. In multiple sclerosis, the immune system attacks the central nervous system, causing loss of the myelin sheath that surrounds neurons – also known as demyelination. As a consequence, nerve function is impaired, leading to physical and cognitive deterioration. In Crohn’s disease, immune cells damage the gastrointestinal tract, which causes severe pain, diarrhea, vomiting, and weight loss. The membrane protein alpha-4 integrin is important in the movement of immune cells from the bloodstream into surrounding tissues. Treatment with an antibody to this protein is believed to inhibit such cell movement, thereby decreasing the immune attack in multiple sclerosis and Crohn’s disease.

Tysabri is an immunosuppressive drug, and the problem with treating any illness with such a compound is that opportunistic infections may occur. Indeed, shortly after Tysabri was approved, several cases of progressive multifocal leukoencephalopathy occurred in recipients of the drug. This is a rare and usually fatal neurological disease caused by the polyomavirus JC. The virus multiplies in and destroy oligodendrocytes, which are cells of the brain that produce the myelin sheath surrounding neurons. JCV was identified in 1971 by inoculation of brain material from a PML patient into cultured human fetal glial cells. In the same year, another polyomavirus, BK, was isolated from the urine of a human renal transplant patient.

Both JCV and BKV are widespread in humans: it has been estimated that up to 90% of the global population is infected with these viruses. Most infections are asymptomatic, making it difficult to determine how the virus is transmitted. They are probably shed intermittently throughout life and spread to others by respiratory or oral routes. Why these viruses can persist for long periods in humans without causing disease is a mystery.

When patients are immunosuppressed – for organ transplantation, as a consequence of AIDS, or by treatment with Tysabri or other monoclonal antibodies that dampen the host immune response – JCVÂ  may multiply unchecked and cause PML. These observations tell us that the immune system is important in regulating the asymptomatic nature ofÂ  human polyomavirus infections.

MS is a relatively common disease (incidence 2-150 per 100,000 population) and therefore treatments such as Tysabri are extremely useful. Clearly it was important for Biogen to determine how to limit the incidence of PML in patients receiving this antibody. Screening a chemical library of 2000 FDA-approved drugs identified mefloquine as an inhibitor of JCV. This compound is now being tested in humans for treatment of PML.

Other human polyomaviruses, including Li, WU, and Merkel cell virus, have been identified in human samples. As immunosuppressive therapy becomes more commonly used to treat a variety of human illnesses, these and other yet undiscovered viruses are likely to emerge as new pathogenic agents. We do not know how many different viruses colonize humans without causing disease. But it is safe to conclude that the zoonotic pool is not the only source of new virus infections for us to worry about.