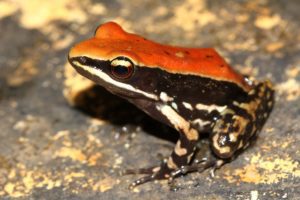 Frogs don’t get flu (as far as I know) but their skin contains a peptide that inhibits the replication of influenza virus (link to paper).

Frog skin contains host defense peptides (HDPs), part of the innate immune defenses of many species. They were first found in amphibians by Michael Zasloff, who, as part of his research, performed surgery on frogs and then returned them to an aquarium – which wasÂ not sterile. He wondered why the frogs always healed without signs of infection, which lead him to discover the antimicrobial peptides, called magainins, in frog skin. HDPs had been first discovered years earlier in the silk moth.

Amphibian HDPs are active against bacteria, fungi, viruses, and protozoa. To discover HDPs that inhibit influenza virus, 32 HDPs from skin secretions ofÂ the Indian frog Hydrophylax bahuvistara were screened by mixing them with virus followed by a plaque assay. One peptide was found to potently inhibit influenza virus replication without cell toxicity. It was called urumin,Â after the whip sword known as urumi.

Urumin inhibits infectivity of influenza H1N1 viruses far better than H3N2 viruses. The reason is that the peptide targets the viral H1 hemagglutinin, one of two glycoproteins in the viral envelope. Furthermore, the peptide appears to interact with the conserved stalk region of the HA glycoprotein, and not with the globular head.

Urumin also reduced disease, death, and the amount of virus in the lung in mice intranasally infected with influenza virus.

These observations suggest that urumin is worthy of additional study as an influenza virus inhibitor. HDPs are attractive antimicrobial compounds because resistance to their mechanisms of action is lower than for other types of inhibitors. However, enthusiasm for urumin is dampened because, despite extensive study, noÂ HDPÂ has yet been approved by the US Food and Drug Administration for use in humans. The obstacles to therapeutic success of HDPs have not beenÂ identified.