The TWiV crew reveal a unique portal on the calcivirus capsid formed upon receptor engagement, and the regulation of interferon responses in virus-infected cells by methylation of mRNA. 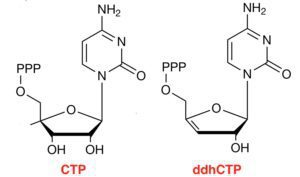 END_OF_DOCUMENT_TOKEN_TO_BE_REPLACED

On episode #263 of the science show This Week in Virology,Â Ben tenOever joins the TWiV team to reveal the winner of his contest in which influenza viruses carrying different interferon-stimulated genes vie against one another in mice.

Viruses are known to evade the early, orÂ innate, host defenses by interfering withÂ the sensing of infection, production of IFN, and synthesis and activity of ISGs. Today we’ll examine the evidence that the function of one or more ISGs is blocked in poliovirus-infected cells.

When IFN is added to the medium of cultured cells, hundreds of ISGs are produced, establishing an antiviral state. Many viruses are unable to replicate in cells treated in this way. An example is the inhibition of replication of encephalomyocarditis virus (EMCV), a picornavirus, by IFN shown in this figure:

In this experiment, IFN was added to the medium of HeLa cells for 16 hours, and then the cells were infected with EMCV. At the indicated times after infection, the medium was removed, and EMCV titer was determined by plaque assay. In mock-treated cells, EMCV produces about 100 plaque-forming units (pfu) per cell*, while IFN treatment of cells blocks virus production.

If the same experiment is done using poliovirus, the outcome is quite different. As shown in the figure below, poliovirus replication is reduced by IFN treatment of cells, but a good amount of virus is nevertheless produced. 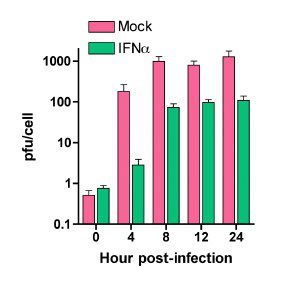 This result suggests that the genome of poliovirus encodes one or more proteins that antagonize the activity of ISGs. Likely candidates for the ISG-busting activity are the two proteases encoded in the viral genome. These proteases, called 2Apro and 3Cpro, process the viral protein and also are known to inactivate cellular proteins. Consistent with this idea, poliovirus with a one amino acid change in 2Apro was found to be completely sensitive to IFN.

This observation indicates that 2Apro blocks the antiviral activity of one or more ISGs.

The EMCV genome encodes a 2A protein that does not have the ability to cleave other proteins. This observation may explain the exquisite sensitivity of EMCV to IFN. Can poliovirus 2Apro turn EMCV into an IFN-resistant virus? To test this hypothesis, the gene encoding 2A was inserted into the genome of EMCV. The resulting virus, EMCV-2A, was able to replicate in cells treated with IFN.

Which ISGs are targeted by poliovirus 2Apro? That is not an easy question to answer, as there are nearly 1000 known ISGs. We’re working on it.

(*The plaque assay is one of several methods for determining virus titer. We’ll discuss this assay in an upcoming post).