Virologist Vincent Racaniello breaks down the first case of polio in the US in nearly a decade. 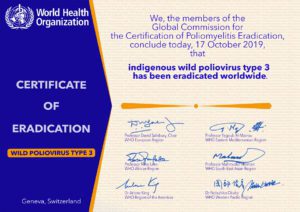 The TWiV team covers outbreaks of eastern equine encephalitis virus in the US and poliovirus in the Philippines, and explain how a chemokine induced by HIV-1 infection helps release more virus particles from cells.

The global withdrawal of the Sabin type 2 poliovirus vaccine is a test of the feasibility of the plan, declared by the World Health Assembly in 1988, to eradicate all polioviruses.

END_OF_DOCUMENT_TOKEN_TO_BE_REPLACED

The TWiV team reviews the first FDA approved gene therapy, accidental exposure to poliovirus type 2 in a manufacturing plant, and production of a candidate poliovirus vaccine in plants.