On episode #373 of the science show This Week in Virology,Â Vincent speaks with Julius about his long career in virology, including his crucial work as part of the team at the University of Pittsburgh that developed the Salk inactivated poliovirus vaccine.

You can find TWiV #373 at microbe.tv/twiv. Or you can watch the video below.

The polio eradication and endgame strategic plan announced by the World Health Organization in 2014 includes at least one dose of inactivated poliovirus vaccine (IPV). Since 1988, when WHO announced the polio eradication plan, it had relied exclusively on the use of oral poliovirus vaccine (OPV). The rationale for including a dose of IPV was to avoid outbreaks of vaccine-derived type 2 poliovirus. This serotype had been eradicated in 1999 and had consequently been removed from OPV. HoweverÂ IPV,Â which is injectedÂ intramuscularly and induces highly protective humoral immunity,Â is less effective in producing intestinal immunity than OPV. This property was underscored by the finding that wild poliovirus circulated in Israel during 2013, a country which had high coverage with IPV.Â Furthermore, in countries that use only IPV, over 90% of immunized children shed poliovirus after oral challenge.Â I have always viewed this shortcoming of IPV as problematic, in view of the recommendation of the World Health Organization to gradually shift from OPV to IPV. Even if the shift to IPVÂ occurs after eradication of wild type polioviruses, vaccine-derived polioviruses will continue to circulate because they cannot be eradicated by IPV. My concernsÂ are now mitigated by new results from a study in India which indicate that IPV can boost intestinal immunity in individuals who have already received OPV.

This study shows that a dose of IPV is more effective than OPV at boosting intestinal immunity in children who have previously been immunized with OPV. Both IPV and OPV should be used together in the polio eradication program. WHO therefore recommends the following vaccine regimens:

Type 2 OPV will be gradually removed from the global immunization schedules. ThereÂ have been no reported cases of type 3 poliovirus since November 2012. If this wild type virus is declared eradicated later this year, presumably WHO will recommend withdrawal of type 3 OPV and replacement with type 3 IPV.

All 342 confirmed cases of poliomyelitis in 2014 were caused by type 1 poliovirus in 9 countries, mainly Pakistan and Afghanistan. Given the social and political barriers to immunization, it will likely take many years to eradicate this serotype. 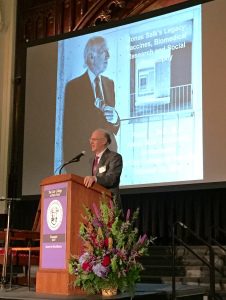 Jonas Salk, who lead the team that developed the first poliovirus vaccine, was born 100 years ago today, 28 October 1914, in New York City. Numerous sites across the country have convened symposia in his honor. Last week City College of New York, where Salk earned a bachelor’s degree, held a centennial celebration. The photoÂ showsÂ Salk’s son Peter speaking at the celebration. New York University Medical Center, where Salk obtained his MD degree, also had a celebration last week. The Salk Institute, founded by Jonas Salk, will hold a celebration on 13 November. And today’s Google Doodle is in honor of Dr. Salk.

In honor of Salk’s memory, I’ve included below myÂ interview with his son, Peter, and a list of all the articles on poliovirus from virology blog. If you can only read one, make itÂ Dreaming of inactivated poliovirus vaccine. Then realize that WHO has called for a switchÂ to Salk’s IPV.

Implications of finding poliovirus in sewers of Brazil and Israel

India has been free of polio for three years

Poliovirus silently (and not so silently) spreads

The wall of polio

WHO will switch to type 2 inactivated poliovirus vaccine

India polio-free for one year

Polio among the Amish

Polio in Pakistan and Afghanistan