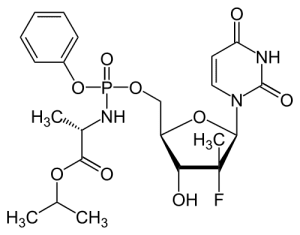 The Federal Drug Administration of the US approves new drugs solely on the basis of safety and effectiveness, with no value assessment. Pharmaceutical companies mayÂ set their drug prices based mainly on what the market will bear. Nevertheless, the announcement thatÂ Gilead Sciences would priceÂ their just-approved, anti-hepatitis C virus (HCV) drug sofosbuvir (Solvaldi) atÂ $84,000 for 12 weeks of treatment was met with considerable complaints.

Solvaldi is a member of a class of antiviral drugs called nucleoside analogs. They act as chain terminators and inhibit viralÂ RNA synthesis. When the viral RNA polymerase is copying the viral RNA, to enable the production ofÂ more virus particles, it normally uses the pool of ATP, UTP, GTP, and CTP to produce more RNA. When Solvaldi is incorporated into the growing RNA chain by the viral enzyme, no additional triphosphates can be added, because the drug contains a fluorine atomÂ at the 2′-position of the ribose. ItsÂ presence inhibits addition of the next nucleoside by the polymerase to the 3′-OH. Viral RNA synthesis therefore stops, and production of virus particles is inhibited. For more information on chain terminators, see my virology lecture on antivirals.

Gilead believes thatÂ the price of the drug isÂ fully justified: a spokesperson saidÂ “We’re just looking at what we think was a fair price for the value that we’re bringing into the health care system and to the patients.”

Despite these arguments, the high price will be a significant barrier for many, especiallyÂ those in limited and fixed-budget programs such as Medicare and Medicaid. AÂ panel of experts in San Francisco estimated that switchingÂ HCV infected Californians toÂ Sovaldi would raise annual drug expenditures in the state by at least $18 billion.

Gilead has agreed to help U.S. patients pay for Sovaldi if they cannotÂ afford it, or help patients obtainÂ drug coverage. The company also plans toÂ charge substantially less for a course of treatment in India ($2000 for the 12 week course), Pakistan, Egypt ($990 for the 12 week course), and China, where most people infected with HCV live. These deals have prompted some to ask if the US isÂ being forced to subsidize the cost of the drug worldwide. I personallyÂ do not object to helping other countries solve their HCV problem.

What is a fair price for a drug that can eliminate HCV infection? Gilead paid more than $11 billion in 2011 to acquire the company that developed Sovaldi, and it is reasonable for them to recoup that investment. Andrew Hill of the Department of Pharmacology and Therapeutics at Liverpool University estimates the manufacturing cost of a 12 week course of treatment with this drug to be $150 to $250 per person. The answer to our fair price question must lieÂ somewhere between these extremes.

There are parallels between Sovaldi (and other new anti-HCV drugs in the pipeline) and the initially expensive antivirals that were introduced ~20 years ago to treat HIV. Anti-retroviralsÂ revolutionized the treatment of a chronic, lethal infection that isÂ major global health problem, and the anti-HCV drugs could have the same effect. But there are also important differences: based on the number of infected individuals,Â HCV is a much larger public health threat than HIV. Furthermore, the new HCV antivirals can eliminate the virus completely, whereas anti-HIV drugs only suppress virus replication, so they must be taken (and paid for) for life.

At some point in the future competition among pharmaceutical companiesÂ andÂ manufacturers of generic drugs should make it possible to treat everyone infected with HCV with affordable, curative antivirals. If the cost and efficiency of diagnosis and drug delivery keeps pace, it might be possible to eradicate HCV. That accomplishment might well be priceless.

On episode #273 of the science show This Week in Virology,Â the TWiVome dissect the finding that interferon lambda alleles predict the outcome of hepatitis C virus infection. 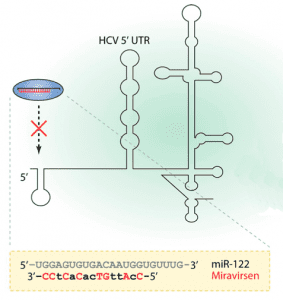 Episode #235 of the science show This Week in Virology wasÂ recorded before an audience at the 2nd Li Ka Shing Institute of Virology Symposium at the University of Alberta, where they spoke with Dave, Stan, and Lorne about their work on poxvirus vaccines and recombination, an enveloped picornavirus, antivirals against hepatitis B and C viruses, and supporting virology research in Alberta. 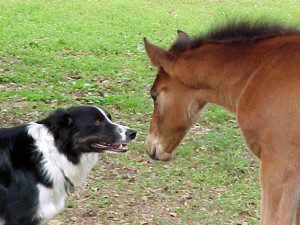 About 2% of the worldâ€™s population is chronically infected with hepatitis C virus (HCV). This enveloped, positive-strand RNA virus was discovered in 1989, but serological and phylogenetic evidence indicates that it has been infecting humans for hundreds of years, perhaps as long ago as the 14th century. All human viral infections most likely originated in non-human species, but the progenitor of HCV is not known. Recent evidence suggests that horses might have been the source of HCV in humans.

For many years there were no known non-human relatives of HCV until canine hepacivirus was discovered in dogs (we discussed this virus on TWiV #137). However two subsequent studies failed to reveal additional evidence for CHV infection of dogs. In one study, no antibodies to CHV were found in sera from 80 dogs in New York State, and in a second study, PCR failed to detect CHV nucleic acid sequences in 190 samples from dogs in Scotland. Samples from rabbits, deer, cows, cats, mice, and pigs were also negative for CHV. However both groups found evidence for infection of horses. These viruses have been called non-primate hepaciviruses (NPHV).

In one study carried out on horses in New York State, 8 of 103 samples were found to contain antibodies to NPHV. Complete viral genomes were identified from all 8 horses. Most are genetically distinct from CHV, but one viral sequence, obtained from a pool of sera from New Zealand horses, is nearly identical to CHV. NPHV was also detected by PCR in sera from 3 of 175 Scottish horses. Separate serum samples obtained from one horse 5 months apart were positive for viral RNA, indicating persistent infection. None of the horses had any evidence of clinical hepatitis or any other illness.

These results from geographically distinct areas suggest that horses are a reservoir of NPHV. It seems likely that dogs might acquire NPHV infection from horses, as there are opportunities for contact between the two animals on farms or in kennels. Additional NPHV isolates from horses must be studied to confirm this hypothesis.

It will be important to determine if horse NPHV was the source of human HCV. This is theoretically possible because horse products, such as serum containing antibodies to pathogens or toxins, have been injected into humans. There are six genotypes of HCV, each of which is believed to have emerged at different times and geographic locations. Whether their emergence represent different cross-species transmissions, as is the case with the different groups of HIV-1, remains to be determined.

I also wonder how horses originally acquired NPHV. Perhaps it was transmitted to them from another species via a vector bite, such as a mosquito – but from what species? 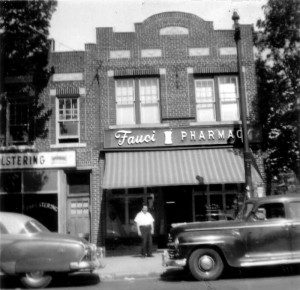 On episode #219 of the science show This Week in Virology,Â Vincent and Rich meet up with Anthony S. Fauci, MD, Director of the National Institute of Allergy and Infectious Diseases.