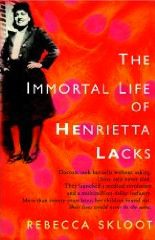 On episode #246 of the science show This Week in Virology,Â Vincent, Alan, Rich, and Kathy discuss the huge Pandoravirus, virologists planning H7N9 gain of function experiments, and limited access to the HeLa cell genome sequence.

We recorded this episode of TWiV as a Google hangout on air. Consequently the audio is not the same quality as you might be used to. But the tradeoff is that you can see each of us on video.

On episode #212 of the science show This Week in Virology,Â the TWiVerers answer listener email about genetically modified chickens, a hendra vaccine for horses, online education, curing color blindness, Roosevelt and polio, Th cells, and much more.

On episode #197 of the science show This Week in Virology,Â Vincent travels to the University of Connecticut to meet up with Professor Philip I. Marcus to discuss his development of the single cell cloning technique in the early 1950s.

Shortly after I wrote about my years of experience with HeLa cells, I was contacted by author Rebecca Skloot. One of her many questions was how I knew that I had produced 800 billion HeLa cells in my laboratory over 26 years. I learned that she was writing a book about Henrietta Lacks, whose tumor was the source of HeLa cells in 1951. Subsequently I had the privilege of reading an early draft of her book, The Immortal Life of Henrietta Lacks, which will be published next month.

I thought I knew enough about HeLa cells and their origins, but Rebecca’s book shattered that impression. I’ve worked with the cells all my career and have always appreciated them, and the fact that Henrietta gave science something fabulous, but the back story I didn’t appreciate. How the whole affair deeply affected that family, and what they went through. I want to thank Rebecca for working so hard to get the whole story. And for being nice enough that the family trusted her! She not only vividly portrays what the family went through, but shows what HeLa has meant to science, how unscrupulous people always want to take advantage of others, and the good and bad about science. In the end, I keep coming back to the same question: if we had informed consent laws back then, would Henrietta have said no? If so, it would have been a tremendous loss for science and medicine. Or should I say setback – because eventually there would have been others. That’s how science is: someone always makes the discovery, sooner or later.

There will be a public launch of the book on 1 February at 7pm at McNally Jackson Bookstore in New York City. Rebecca will read a bit from the book, talk about it, sign it, and answer questions. Below are the details of the public event. If you are in the New York area, and have an interest in science, I encourage you to attend. I will certainly be there!

Award winning science writer Rebecca Skloot discusses and signs her new book, The Immortal Life of Henrietta Lacks. Books available for sale at this launch event one day before the book’s official publication date. Free & open to the public.

Book description: Her name was Henrietta Lacks, but scientists know her as HeLa. She was a poor Southern tobacco farmer who worked the same land as her slave ancestors, yet her cells — taken without her knowledge — became one of the most important tools in medicine. The first immortal human cells grown in culture, they are still alive today, though she has been dead for more than sixty years. If you could pile all HeLa cells ever grown onto a scale, they’d weigh more than 50 million metric tons — more than 100 Empire State Buildings. HeLa cells were vital for developing the polio vaccine; uncovered secrets of cancer, viruses, & the effects of the atom bomb; helped lead to important advances like in vitro fertilization, cloning, and gene mapping; and have been bought and sold by the billions. Yet Henrietta Lacks remains virtually unknown, buried in an unmarked grave. Now Rebecca Skloot takes us on an extraordinary journey, from the colored ward of Johns Hopkins Hospital in the 1950s to stark white laboratories with freezers full of HeLa cells; from Henriettas small, dying hometown of Clover, Virginia — a land of wooden slave quarters, faith healings, and voodoo — to East Baltimore today, where her children and grandchildren live, and struggle with the legacy of her cells. Henriettas family did not learn of her immortality until more than twenty years after her death, when scientists began using her husband and children in research without informed consent. The story of the Lacks family — past and present — is inextricably connected to the dark history of experimentation on African Americans, the birth of bioethics, and the legal battles over whether we control the stuff we are made of. More information atÂ rebeccaskloot.com.

“This is an extraordinary book, haunting and beautifully told.” — ERIC SCHLOSSER, author of Fast Food Nation

If you have been following the results of my experiments on inhibition of rhinovirus replication by ZnCl2, you know that I’ve been trying to determine why concentrations of the salt higher than 0.1 mM are toxic to HeLa cells. I have found that 0.1 mM ZnCl2 does inhibit rhinovirus plaque formation but not sufficiently to be able to select resistant mutants. In today’s set of experiments I asked whether the presence of MgCl2 in the agar overlay potentiates zinc toxicity.

We always include MgCl2 (40 mM) in the agar overlay when assaying rhinoviruses, because it significantly improves plaque size. The following monolayers of HeLa cells were inoculated with 200 plaque-forming units of rhinovirus type 1a, then incubated at 32Â°C for 5 days. The effect of MgCl2 is remarkable. 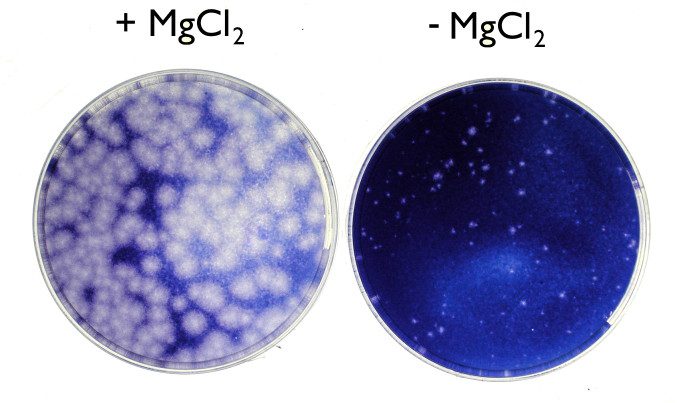 Unfortunately, omission of MgCl2 from the agar overlay has no effect on zinc toxicity. As shown below, cell viability was still poor in the presence of 0.2 mM ZnCl2. 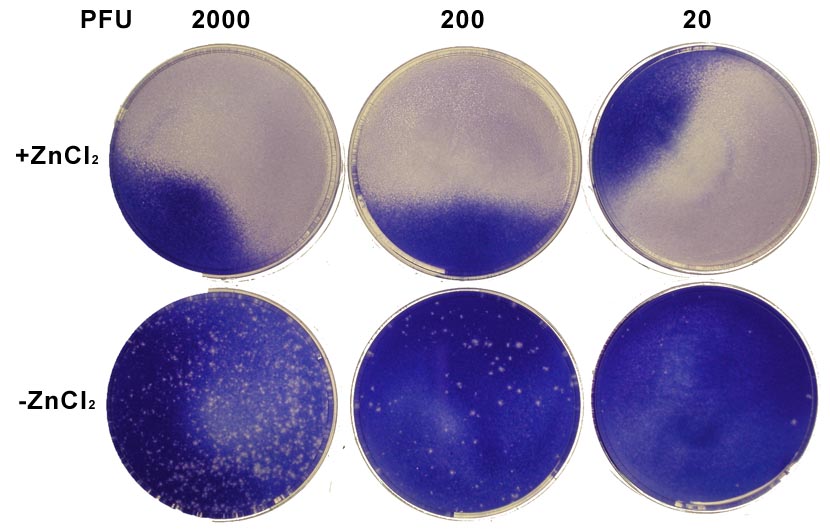 What’s next? One reader suggested that I try selecting HeLa cells in successively higher concentrations of ZnCl2 to obtain cells resistant to the toxic effects of the salt. This approach is under way. I will also attempt to propagate rhinovirus in cells covered with liquid growth medium rather than under agar. If 0.1 mM ZnCl2 is included in the culture medium, a good fraction of the viruses produced might be resistant to the salt. The virus produced in these infected cells will be used to infect fresh cells, also in culture medium with ZnCl2. After 5-10 passages in this manner the majority of the viral population should be resistant to ZnCl2. This is a more time consuming approach that the plaque assay, but might yield zinc resistant rhinovirus mutants.