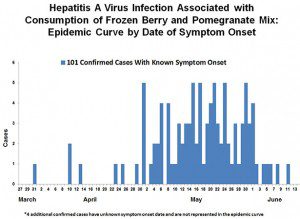 An outbreak of hepatitis A virus (HAV) infections in eight US states has been attributed to consumption of Townsend Farms Organic Anti-Oxidant Blend frozenÂ berry and pomegranate mix purchased from Costco markets.Â Since March 2013, 118 individuals have acquired the infection and 80% report having eaten this fruit product. Townsend Farms has recalled some lots of this product because, according to the producer, one of the ingredients of the blend, “pomegranate seeds processed in Turkey, may be linked to an illness outbreak outside of the United States”. The Food and Drug Administration will soon begin testing for the presence of hepatitis A virus in the berry mix.

There are six genotypes of HAV that circulate worldwide. According to the CDC, the virus strain causing this outbreak is HAV genotype 1B, which is often found in North Africa and the Middle East but is rarely isolated in the Americas.Â Genotype 1b caused a 2013 European outbreak linked to frozen berries, and a 2012 British Columbia outbreak in which a frozen berry blend was implicated. In the BC outbreak the berry blend contained pomegranate seeds from Egypt. This is likely why Townsend Farms recalled the berry mix when they found that it contained pomegranate seeds processed in Turkey.

A well-known outbreak of hepatitis A infection took place in November 2003 among the patrons of a single Pennsylvania restaurant. In this outbreak of 601 patients, 3 died and 124 were hospitalized. Infection was caused by consumption of salsa which had been prepared with green onions grown in northern Mexico that wereÂ contaminated with hepatitis A virus.