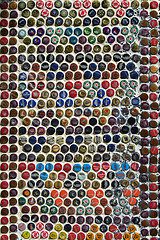 In “Hantavirus protein replaces eIF4F” we discussed how the binding of hantavirus N protein to the 5′-cap structure on mRNA replaces the translation complex eIF4F. A second research group has revealed yet another function for this interaction: the N protein sequesters mRNA caps in P bodies, for subsequent use during the initiation of viral mRNA synthesis.

The synthesis of mRNA in cells infected with members of three different viral families, bunyaviruses (to which hantaviruses belong), orthomyxoviruses, and arenaviruses is unusual because it is primed with a 5’capped oligonucleotide derived from cellular mRNAs. These capped primers are cleaved from cell mRNAs by viral endonucleases. After finding that the hantavirus N protein binds short, capped RNAs, the authors wondered whether such oligonucleotides might be stored in P bodies. These are regions of the cytoplasm that contain a variety of enzymes involved in turnover of mRNA; among other activities, they are storage areas for mRNAs that are not being translated into protein. The authors found that the hantavirus N protein localizes to P bodies, where it was associated with 5′-caps. The N protein-associated 5’caps, which were protected from degradation, were also used for viral mRNA synthesis.

Apparently these authors have also found that N protein can replace eIF4F during translation (although the data are not shown). They suggest that N protein remains bound to the 5′-cap structure during initiation of mRNA synthesis, and remains in place after the mRNA is complete. The protein is then in an excellent position to mediate ribosome binding to the mRNA. This model would imply that hantavirus mRNA translation is largely independent of the cap binding protein, eIF4E, a conclusion consistent with previous experimental results. A recent report indicates that influenza mRNA translation does not require eIF4E. Because influenza mRNA synthesis is also primed with capped oligonucleotides, the obvious – yet unproven – conclusion is that these caps are also stored in P bodies.

Thanks to Aidan for the title of this post.

The cellular translation machinery is frequently modified in virus-infected cells. Antiviral defense systems or stress responses may be initiated to inhibit protein synthesis and restrict virus replication. On the other hand, many viral genomes encode proteins that modify the cellular translation apparatus to favor the production of viral proteins over those of the cell. One such well-studied modification is the cleavage of the cellular translation protein eIF4G (see illustration) in cells infected by picornaviruses. The consequence of this modification is that capped cellular mRNAs cannot be translated. As the viral genomes are translated by internal ribosome entry, viral protein synthesis is not affected by cleavage of eIF4G.

A recent report in The EMBO Journal has revealed a novel modification of the cellular translation apparatus in cells infected with Sin Nombre virus, a hantavirus.The authors show that the viral nucleocapsid (N) protein binds with high affinity to the cap structure on cellular mRNAs. The N protein can also bind the 43S preinitiation complex (which consists of the 40S ribosomal subunit, several initiation proteins, and the met-tRNAi). Finally, N protein has RNA helicase activity, which facilitates ribosome movement through areas of RNA secondary structure. This viral protein therefore functionally replacesÂ  all three components of eIF4F: eIF4E (the cap-binding protein), eIF4G (the scaffolding protein which connects the ribosome to the mRNA), and eIF4A, an RNA helicase. It does so even though it has no amino acid similarity to the proteins of eIF4F. Furthermore, the N protein was previously shown to be involved in viral RNA replication and encapsidation. The multifunctional nature of the N protein should come as no surprise: the hantavirus genome encodes only four proteins. Each must therefore fulfill multiple functions in the replication cycle.

Why would the hantavirus genome encode a protein that replaces eIF4F? One of the earliest cellular responses to virus infection is inhibition of translation;the goal is to restrict viral spread. The properties of the N protein could enable unabated viral translation in the face of such a cellular defense. Furthermore, many viral genomes encode proteins that inhibit viral translation. No such activity has been described in cells infected with hantaviruses. Nevertheless, the N protein could permit translation of viral mRNAs when that of cellular mRNAs is inhibited.

The participation of the hantavirus N proteins in multiple events in the cell identify it as an excellent target for therapeutic intervention.