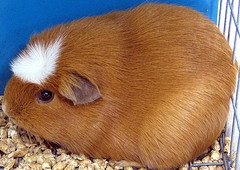 The cute guinea pig returns for another installment on why influenza is prevalent during winter months in temperate climates.

We previously discussed work by Palese and colleagues in which a guinea pig model for influenza virus transmission was used to conclude thatÂ spread of influenza virus in aerosols is dependent upon temperature and relative humidity.Â They found that transmission of infection was most efficient when the humidity was 20-35%; it was blocked at 80% humidity. The authors concluded that conditions found during winter, low temperature and humidity, favor spread of the infection. Lower humidity favors virion stability and smaller virus-laden droplets, which have a better chance to travel longer distances.

Changes in relative humidity, the authors argue, do not match the seasonal patterns of influenza transmission. Although relative humidity indoors is low in the winter, outdoor levels peak during this season. Absolute humidity, on the other hand, has a seasonal cycle with low values both indoors and outdoors during winter months, consistent with the increased transmission of influenza.Â

The conclusion of both papers is the same: humidification of indoor air during the winter might be an effective means of decreasing influenza virus spread.Â

On the weather report, the amount of moisture in the air is given as a percentage. This is relative humidity -Â the ratio of the partial pressure of water vapor in a gaseous mixture of air and water vapor to the saturated vapor pressure of water at a given temperature. Absolute humidityÂ is the actual amount of water vapor in a liter of gas. Any easy way to remember what measurement of humidity is important for influenza transmission is that it’s not what you hear on the weather report.