The TWiVsters reveal new giant viruses that argue against a fourth domain of life, and discovery ofÂ viruses in the oceanic basement.

You can find TWiV #437 at microbe.tv/twiv, or listen below. 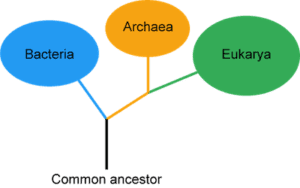 When giant viruses were discovered – with genomes much larger than any previously seen – some suggested that they had descended from a fourth domain of life (the current three are bacteria, archaea, and eukaryotes). Part of the reason for such a claim was the finding of homologs of bacterial and eukaryotic genes, including moleculesÂ involved in translation. AnalysisÂ of new giant viruses encoding even more components of the translation machinery has thrown cold water on the fourth domain hypothesis.

Klosneuvirus, with a 1.57 million base pair DNA genome, was discovered in a wastewater treatment plant in Austria, and three related viruses – Indivirus, Hokovirus, and Catovirus – were found in environmental samples. Â Sequence analyses suggests that these viruses should be classified in a subfamily of the Mimiviridae.

Phylogenomic analyses demonstrate that the aminoacyl tRNA synthetase and translation factor genes are likely derived from protists. This finding is not compatible with the hypothesis that these viruses are derived from a fourth domain of life. It is more likely that smaller ancestors ofÂ giant viruses acquired these genes from known eukaryotes.

On episode #261 of the science show This Week in Virology,Â Vincent meets up with Chantal and Jean-Michel at the first International Symposium on Giant Virus Biology in Tegernsee, Germany,Â to discuss their work on Mimivirus, Megavirus, and Pandoravirus.