Elke, Adam, and Gabor join TWiV to discuss their work on Lloviu virus, a filovirus, including recovery of infectious virus from a DNA copy of the genome and from Schreiber’s bats in Hungary. 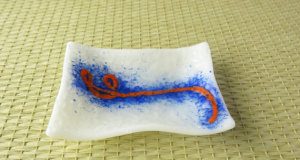 The family of viruses known as the Filoviridae (filo, from the Latin for thread) is well known for the ebolaviruses, which cause the hemorrhagic disease that regularly erupts in Africa. As Earthâ€™s virome is slowly revealed, other filoviruses are discovered.

END_OF_DOCUMENT_TOKEN_TO_BE_REPLACED

You can find TWiV #415 at microbe.tv/twiv, or listen below.

When viruses cross species, serial transmission may lead to the selection forÂ mutations that confer improved replication or transmission in the new host. Identifying such mutations in human viruses is extremely difficult: we cannotÂ conduct the appropriate experiments in humans, and often do not haveÂ viral isolates spanning the time from spillover through prolonged circulation. The 2013-2016 outbreak of Ebola virus in West Africa is unique because viralÂ genome sequences were obtained early and throughoutÂ the epidemic. The results of two new studies (link to paper one, link to paper two)Â suggest that some of the observed mutations increase infectivity for human cells. The impact of these mutations on infection of humans, and their role in the West African outbreak, remain unknown.

Many mutations have been identified among the many hundreds of genome sequences obtained during the recent Ebola virusÂ epidemic. One stands out:Â a mutation that leads to a single amino acid change in the viral glycoprotein, from alanine to valine at position 82 (A82V). This change arose early in the outbreak (it was first observed in Guinea in March 2014) and was subsequently found in most of the isolates. It has never been observed in previous Ebolavirus outbreaks.

The effect of the A82V change on viral infectivity was determined by building pseudotyped viral particles – in this case, HIV particles with the Ebola virus glycoprotein. Human cells in culture were infected with pseudotyped viruses with the Ebola virus glycoprotein with either alanine or valine at position 82. Infectivity was measured by quantifying the production of a protein from the HIV genome. The results show that A82V increases infectivity by twofold. The effect is also observed in cells from non-human primates, but not from rodents, dogs, or cats. However, the A82V change decreased infectivity in bat cells.

The A82V change is located at the binding site of the Ebola virus glycoprotein with the cell fusion receptor, NPC1. It appears to increase the fusion activity of the viral glycoprotein.

The pattern of increased infectivity in primate cells, and decreased infectivityÂ in bats, is consistent with the hypothesis that the outbreakÂ virus came from bats, and afterÂ circulation of the virusÂ in humans, it lost some ability to infect bat cells while becoming better at infecting human cells. However there is still no solid proof that bats are a reservoir ofÂ Ebolaviruses.

What does increased infectivity have to do with infection of humans? The idea is that the mutation increases the efficiency of virus entry into cells, and hence increased viral gene expression is observed.Â Fewer viruses needed to infect a cell, the better chance of initiating an infection. But is the two-fold increase observed in cells enough to impact infection in humans?

The assays used in these papers measure protein production from an HIV genome. The experiments need to be repeated using bona fide Ebola virus, to make sure that the mutations have the same effect. The changes might have impacts on other stages of viral replication. Furthermore, the impact of the changes in the viralÂ glycoprotein should be assessed in animal models, to determine if improved infectivity hasÂ any impact on pathogenesis and transmission. Ultimately, we canâ€™t prove that these mutations have any effect in humans – the needed experiments cannot be done.

Iâ€™m curious about why the A82V change was not seen in previous Ebola virus outbreaks. Those were in different parts of Africa – could the changes be driven by population genetics, ecology, or other factors? It will be important to determine if the same change is selected in future outbreaks.

The authors are sufficiently cautious in their conclusions. From paper #2:

Despite the experimental data provided here, it is impossible to clearly establish whether the adaptive mutations observed were in part responsible for the extended duration of the 2013â€“2016 epidemic. Indeed, it seems likely that the prolonged nature of the outbreak in West Africa was primarily due to epide- miological factors, such as an increased circulation in urban areas that in turn led to larger chains of transmission.

Our findings raise the possibility that this mutation contributed directly to greater transmission and thus to the severity of the outbreak.Â It is difficult to draw any conclusions from this hypothesis, though…

As I feared, press coverage of these findings has been inaccurate. For example, a BBC headline proclaims “Ebola adapted to easily infect peopleâ€. Even the journal Cell, which published both papers, made an incorrect conlcusion: see the screen capture below from the journal website.

Both Cell and theÂ BBC might have taken too literallyÂ the unfortunate title of one of the papers, Â “Human adaptation of Ebola virus during the West African Outbreak.â€ The results suggestÂ adaptation to human cells, not to humans. The title of the second paper is sufficiently careful: â€œEbola virus glycoprotein with increased infectivity dominated the 2013-2016 epidemicâ€. But thatâ€™s not a BBC headline. 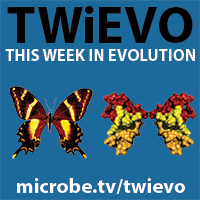 On episode #5 of the science show This Week in Evolution,Â Sara Sawyer and Kartik Chandran join Nels and Vincent to talk aboutÂ howÂ the filovirus receptor NPC1 regulates Ebolavirus susceptibility in bats.

You can find TWiEVO #5 at microbe.tv/twievo, or you canÂ listen below.