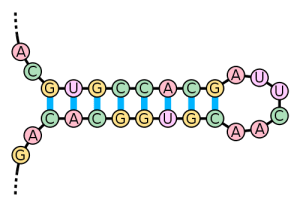 Neisseria meningitidisÂ mayÂ cause septicemia (bacteria in the blood) and meningitis (infection of the membrane surrounding the brain), but the bacterium colonizes the nasopharynx in 10-20% of the human population without causing disease. Although understanding how the bacterium changes from a commensal to a pathogen has been elusive, an important property is believed to be the ability to resist destruction by the immune response. Fever caused by a viral infection might be the trigger that makesÂ N. meningitidisÂ evade immunity.

A property of N. meningitidisÂ that makes it cause disease is resistance to complement, a collection of proteins in the blood that help clear pathogens.Â N. meningitidisÂ has evolved several mechanisms to avoid destruction by complement, including the production of a polysaccharide capsule, addition of sialic acid to a component of the bacterial outer membrane, and the production of a protein that binds one of the complement proteins. It is not clear why a commensal organism would have evolved such evasion mechansims – invading the blood and the brain are dead ends, as they do not lead to transmission to a new host.

An answer to this question comes from the finding thatÂ N. meningitidisÂ proteins essential for resistance to complement are under the control of an RNA thermosensor. This control element is an RNA stem loop structure (pictured) formed by base pairing of local sequences within the RNA. Buried in the base-paired stem is a short sequence called the ribosome binding site that is essential for translation of the mRNAs into protein. At 30Â°C, the stem loop structure is intact, preventing binding of ribosomes to the mRNA; protein synthesis is blocked. At elevated temperatures – 37 or 40Â°C – abundant protein synthesis takes place, because the RNA secondary structure is denatured, allowing ribosomes to more efficiently access the ribosome binding site on the mRNA.

How do these findings explain whyÂ N. meningitidisÂ becomes a pathogen? The temperature of the upper respiratory tract, where the bacterium normally colonizes, is low, so the RNA sensor is intact, preventing production of proteins needed for resistance to complement. If the respiratory tract is infected with a virus, a local immune response occurs which is accompanied by high temperatures – a fever. The RNA thermosensors ofÂ N. meningitidisÂ have evolved to sense elevated temperature and turn on the synthesis of proteins that help it to avoid destruction by the immune response. Unfortunately, inflammation also damages the mucosal barriers that normally prevent microbes from invading the underlying tissues, where they have access to the bloodstream.Â N. meningitidisÂ enters the blood stream, and because it is resistant to complement, it is not cleared. The result may be septicemia and infection of the brain. Moving away from its niche in the respiratory tract is probably not part of the microbeâ€™s plan, but rather a consequence of the fact that it has evolved to survive immune responses to other pathogens in the respiratory tract.

There is some epidemiological support for this scenario: peaks ofÂ Neisseria meningitidisÂ disease may follow outbreaks of influenza.

The conversion of commensal bacteria into pathogens by a second infection may be more common than we know.Â Streptococcus pneumoniaeÂ is aÂ human nasopharyngeal commensal that colonizes 10 to 40% of healthy individuals. The bacterium is also a leading cause of respiratory disease. There is evidence that infection with influenza virus releasesÂ S. pneumoniaeÂ bacteria from biofilms; the free-living bacteria are then able to cause respiratory disease. One of the influenza virus-induced host signals responsible for changingÂ S. pneumoniaeÂ from a commensal to a pathogen is fever. Â For more on this story, listen to This Week in Microbiology #62.

Vincent, Alan, and Rich explore a novel bunyavirus isolated in China, the recent polio outbreak in Republic of the Congo, and cell to cell transmission of a retrovirus by biofilm-like extracellular assemblies.

Rich – Should smallpox be destroyed? (Emerging Infectious Diseases)
Alan – Zoology of the Beagle images
Vincent – Vaccines and Your Child by Paul Offit and Charlotte Moser

On This Week in Virology episode #9, Vincent and Dick recall the discovery of Lassa virus in Africa in 1969. A non-fictional account of the story, â€˜Feverâ€™, written by John G. Fuller and published in 1974, inspired Vincent to become a virologist. Part of the story took place at Columbia-Presbyterian Hospital (now Columbia University Medical Center), where both Vincent and Dick are employed. Dick remembers many of the key players in this medical drama.