TWiV reviews recent cases of monkeypox, presence of SARS-CoV-2 RNA but not infectious virus in feces, and the association of autoantibodies to interferons with severe COVID-19. 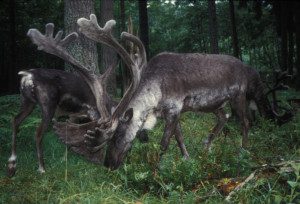 Recovering viral genomes from ancient specimens can provide information about viral evolution, but not many old nucleic acidsÂ have been identified. A study of 700 year old caribou feces reveals that viruses can be protected for long periods of time – under the right conditions.

The oldest virus recovered so far is the giant Pithovirus sibericum, which was isolated from 30,000 year old Siberian permafrost. Other attempts have yielded fragments of viral genomes. It was possible to reconstruct the 1918 influenza virus from small RNAs recovered from formalin fixed and frozen human tissues. However this feat was not achieved for viral RNA in 140,000 year old Greenland ice cores, 900 year old North African barley grains, or 7,000 year old Black Sea Sediments.

Caribou feces have been frozen for the past 5,000 years in ice patches in the Selwyn Mountains of the Canadian Northwest territories. To determine if viruses could be recovered from this material, the frozen feces were thawed, resuspended in buffer, filtered, and treated with nucleases to destroy any nucleic acids not contained within a viral capsid. Sequence analysis of the remaining nucleic acids revealed two different viruses.

Sequences of an RNA virus distantly related to picornaviruses of insects (such as Drosophila C virus) were also identified in the caribou feces. These viral genomes exceed 7.4 kb, but it was only possible to recover a 1.8 kb fragment of this virus, ancient Northwest Territories cripavirus (aNCV).

Neither virus was isolated from contemporary Caribou feces collected from an animal living in the same region. The authors also went to great pains to demonstrate that the two 700 year old viral genomes were not contaminants. The isolation was repeated in a different laboratory, and wasÂ not to be a consequence of contamination from any laboratory reagent or apparatus used for purification of nucleic acids.

It is not likely thatÂ aCFV or aNCV infected a caribou 700 years ago. The virusesÂ were probably acquired when a caribou ingested plant material infected with the plant virus; perhaps insects harboring aNCV were also present on these plants. The exact hosts for both viruses are unknown.

The fact that two relatively large fragments of viral DNA and RNA were identified suggests that intact capsids were present in the caribou feces. Their preservation is probably a consequence of the low temperature of the arctic ice, and the stable icosahedral capsids characteristic of members ofÂ geminiviruses, gemycircularviruses, and cripaviruses.

We already know that viruses have been around for a long time, more than hundreds of millions of years, so what is the value of this work? Studying ancient viruses can provide insight into viral diversity and evolution. However, the value of two viral genome sequences is limited, and additional work should be done to acquire additional specimens spanning a long period of time. Similar sampling of other environments would also be desirable, but it is unlikely that large fragments of viral genomes can be recovered from specimens that are not frozen. And as the ice caps melt away, we will lose our ability to decode this important viral record.