Amy joins the TWiV team to review evidence that enterovirus D68 is an etiologic agent of childhood paralysis, and her finding that the ability of the virus to infect cells of the nervous system is not a recently acquired property. 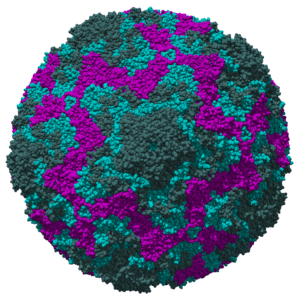 END_OF_DOCUMENT_TOKEN_TO_BE_REPLACED

In the second episode from the Karolinska Institute in Stockholm, Vincent speaks with Jan Albert, Petter Brodin, and Anna Smed-SÃ¶rensen about their work on enterovirus D68, systems immunology, and human pulmonary viral infection and inflammation.

On episode #331 of the science show This Week in Virology, the TWiVÂ team discusses the possible association of the respiratory pathogen enterovirus D68 with neurological disease.

I cannot pass up the opportunity to point out this wonderful quote by Ginia Ballafante in her NY Times piece, Fear of Vaccines Goes Viral. The article starts by notingÂ an article on plummeting vaccination rates in Los Angeles:

The piece had the virtue of offering New Yorkers yet another opportunity to feel smugly superior to their counterparts in L.A., because of course here on the East Coast we like our science to come from scientists, not from former Playboy models and people who feel entitled to pontificate about public health because they drink kefir.

As a scientist who works in New York, I can’t help but think that this is not entirely true. This idea is supported by a quote in the article from a New York City pediatrician, who says that 10 percent of parents in his practice express opposition to vaccination. If they oppose vaccination, they can’t be getting their information from scientists.

Here is the second best quote from the article, which comes from another New York City pediatrician after a discussion of current Ebola virus and enterovirus D68 outbreaks:

My feeling is that it will take something like that on a very large scale to get upper-middle-class people to realize that this is serious stuff…most of the deaths in the world are from contagious diseases. Not ISIS.

On episode #302 of the science show This Week in Virology, the TWiVers discuss the growing Ebola virus outbreak in West Africa, and an epidemic of respiratory disease in the US caused by enterovirus D68.