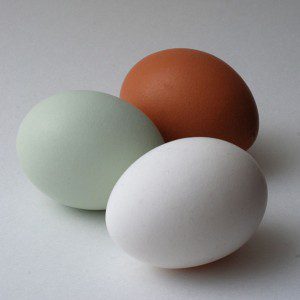 When you purchase chicken eggs at the market, they usually have white or brown shells. But some breeds of chicken produce blue or green eggs. The blue color is caused by insertion of a retrovirus into the chicken genome, which activates a gene involved in the production of blue eggs.

The Araucana, a chicken breed from Chile, andÂ Dongxiang and Lushi chickens in China lay blue eggs. Blue eggshell color is controlled by an autosomal dominant gene:Â eggs produced by homozygote chickens are darker blue than those from heterozygotes. The gene causing blue eggshell color is called oocyan (O) and was previously mapped to the short arm of chromosome 1.

The retrovirus insertion has occurred at different positions in the Chilean and Chinese chicken genomes. This observation indicates that the insertion arose independently during breeding of chicken strains several hundred years ago to produce blue egg layers. The chicken genome contains multiple copies of endogenous retroviruses, which can duplicate and move to other locations. We can assume that a random insertion upstream of the SLCO1B3 gene was selected for by breeding procedures that were aimed at producing blue egg-laying chickens.

The SLCO1B3 gene encodes a membrane transporter protein that mediates the uptake of a wide range of organic compounds into the cell. The blue eggshell color isÂ produced by deposition of biliverdin on the eggshell as it develops in the uterus. Biliverdin is one component of bile salts, which are transported by SLCO1B3, providing a plausible hypothesis for the role of the protein in making blue eggshells.

Blue eggshell color is another example of the important roles that retroviruses have played in animal development. One other is the help provided by retroviruses in producing the placenta of mammals. Not all retroviral insertions are beneficial – integration next to an oncogene can lead to transformation and oncogenesis.

The Koala retrovirus (KoRV) continues to spread within Australia, according to results of a new analysis of a larger sample size from a wider geographical range than was previously studied.

Blood or tissue samples were collected from koalas in different regions of Australia, and polymerase chain reaction (PCR) was used to detect the presence of KoRV proviral DNA,Â a DNA copy of the retroviral genome integrated into host cell DNA. Most of the koalas from the Australian mainland were positive for KoRV proviral DNA (442/466; 94.8%). All samples from animals in Queensland and New South Wales were KoRV positive. In mainland Victoria 65 of 89 animals contained KoRV DNA (73%). On the Victorian islands prevalence of KoRV ranged from 0% on Philip Island (0/11) to 50% on Snake Island (6/12). On the previously KoRV-free Kangaroo Island (link), 24 of 162 animals (14.8%) were KoRV positive. These results suggest that KoRV initially entered the koala population in the north of Australia and has been slowly spreading to the south. There are also other potential explanations for the results: there may be differences in KoRV susceptibility in northern versus southern animals, and the rate of transmission might differ in the two areas.

The genome of Queensland koalas contain far more copies of KoRV per cell, 165, than animals in Victoria, which ranged from less than one to 1.5 copies per cell. The Queensland koalas are likely fully endogenized – that is, the integrated KoRV DNA is passed from parent to offspring in the germline, and hence every koala cell contains viral DNA. In contrast, in Victoria koalas KoRV has either recently entered the germline (1.5 copies/cell) or has not yet entered this state (<1 copy/cell). In animals with less than one proviral copy per cell, KoRV infection was likely acquired exogenously from one animal to another. The mode of transmission of KoRV among koalas is not known, but might involve animal-animal contact or arthropod transmission.

It seems likely that eventually all wild koalas will be endogenized by KoRV. Whether this process will impact the long-term survival of the species is not known, especially since the disease caused by KoRV infection is poorly understood.

On episode #114 of the podcast This Week in Virology, Vincent, Alan, and Rich revisit ten compelling virology stories of 2010. 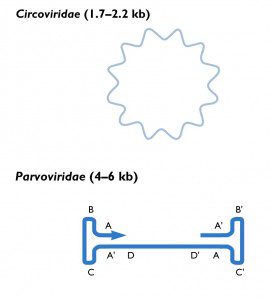 During the replication of retroviruses, a double-stranded DNA copy of the viral RNA genome is synthesized by reverse transcription and integrated into the genomes of the infected cell. When retroviral DNA is integrated into the DNA of germ line cells, it is passed on to future generations in Mendelian fashion as an endogenous provirus. Until very recently, retroviruses were the only known endogenous viruses. This honor has now been extended to other RNA viruses, and to circoviruses and parvoviruses, which possess single-stranded DNA genomes. Such integration events constitute a fossil record from which it is possible to determine the age of viruses.

The first non-retroviral endogenous virus described was bornavirus, a virus with a negative-stranded RNA genome. Bornaviral sequences were found in the genomes of humans, non-human primates, rodents, and elephants. Phylogenetic analyses revealed that these sequences entered the primate genome over 40 million years ago. Endogenous filovirus (ebolavirus, marburgvirus) sequences were subsequently identified in the genomes of bats, rodents, shrews, tenrecs and marsupials. Based on these analyses it was estimated that filoviruses are at least tens of millions of years old. The presence of endogenous bornavirus and filovirus sequences were subsequently confirmed and extended to 19 different vertebrate species. Endogenous hepadnaviruses probably entered the genome of the zebra finch 19 million years ago.

Recent additions to the endogenous virus catalog are the circoviruses and parvoviruses. The genome of circoviruses are composed of single-stranded DNA, while those of parvoviruses are linear single-stranded DNAs with base-paired endsÂ (figure). Phylogenetic analyses of these endogenous viral sequences reveal that both virus families are 40 to 50 million years old.Â Examination of insect genomes has revealed endogenous viral sequences from members of the Bunyaviridae, Rhabdoviridae, Orthomyxoviridae, Reoviridae, and Flaviviridae.

With the exception of retroviruses, these endogenous viral sequences have no role in viral replication – they are accidentally integrated into host DNA. Such sequences are highly mutated and typically comprise only fragments of the viral genome, and therefore cannot give rise to infectious virus. Whether these sequences confer any biological advantage to the host is an interesting question. It is possible that some of the endogenous viral sequences are copied into RNA, or translated into protein, and could have consequences for the host. For example, it has been suggested that synthesis of the bornaviral N protein from endogenous sequences might render the host resistant to infection with bornaviruses.

How are non-retroviral genomes integrated into the host DNA? For viruses with an RNA genome, the nucleic acid must enter the nucleus (perhaps accidentally for viruses without a nuclear phase) and be converted to a DNA copy by reverse transcriptase encoded by endogenous retroviruses. Hepadnaviruses encode a reverse transcriptase which produces the genomic DNA from an RNA template. In all cases, recombination could lead to integration of viral DNA into the host chromosome.

AlmostÂ half of the human genome is made up ofÂ mobile genetic elements, which includes endogenous provirusesÂ and other sequences derived from retroviruses such as retrotransposons, retroposons, and processed pseudogenes. It seems likely that even more diverse viral sequences lurk in cellular genomes, awaiting discovery.

There are 62 koalas in Japanese zoos, and 50 of them are infected with koala retrovirus (KoRV). Infection may lead to leukemia and lymphoma, which could negatively impact Koala populations. What is the origin of KoRV?

The koala is native to Australia where they are found in eastern and southern coastal areas. All koalas in the eastern state of Queensland are infected with KoRV, while there are still some uninfected animals in the south. In particular, the koalas on Kangaroo Island do not carry the virus. Koalas were imported to Kangaroo Island in the early 1900s, and apparently those animals were free of KoRV. The island is 8 miles offshore which may contribute to the absence so far of the virus. However, the koalas sent to Japanese zoos likely carried KoRV.

Curiously, 38 koalas have been born in Japanese zoos since the original importation, and 36 of these animals are infected with KoRV. This high rate of infection is a consequence of the fact that KoRV DNA integrates into DNA of koala germ cells. The viral genome is transmitted vertically, from mother to offspring.

The nucleic acid of retroviruses is RNA, but it is converted to a DNA copy during infection and integrates into host cell DNA. If the viral DNA integrates into the germ line, then it can remain in the organism for many generations. The genomes of most higher organisms contain remnants of retroviral genomes called endogenous retroviruses (ERVs). In primates these infections appear to have occurred millions of years ago; in humans, they comprise 6-8% of the genome, more than protein coding sequences (1-2%)! Most ERVs are defective but the koala ERVs are unique because they appear to produce viral particles.

No one has ever observed germ-line infection of a species with retroviruses – until infection of koalas with KoRV was discovered.Â  This process of ‘endogenization’ can now be studied in real time.

When did the KoRV begin invading the koala genome? It has been suggested that the initial infection occurred less than 100 years ago, but examination of preserved Koala DNA will be required to confirm this estimate.

The origin of most ERVs is unknown because the original infecting viruses disappeared long ago. But it might be feasible to identify the precursor of KoRV, which entered the genome relatively recently. KoRV appears to be closely related to an ERV of the Asian mouse Mus caroli. If this relationship is correct it will have to be determined how the virus was transmitted from mice in Southeast Asia to koalas in Australia.

Infection with KoRV in captive animals may lead to fatal lymphomas or immunosuppression and chlamydial infection. It is possible that infection of wild animals might lead to further decreases in this dwindling population. Should a KoRV vaccine developed to prevent extinction? Development and testing of a vaccine would require the use of koalas. It’s a difficult question, because the spread of KoRV among koalas is a natural part of evolutionary selection. Should we interfere?