On episode #318 of the science show This Week in Virology, the TWiV gang reviews ten fascinating, compelling, and riveting virology stories from 2014. 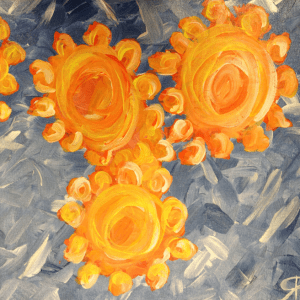 Middle Eastern respiratory syndrome coronavirus (MERS-CoV),Â first identifiedÂ in the fall of 2012 in a Saudi Arabian patient, has since infected over 180 individuals, causing 77 deaths. Antibodies to the virus and the viral genome have been found in dromedary camels inÂ JordanÂ andÂ Saudi Arabia, implicating those animals as the source of human infections. A new study reveals that the virus has infected camels throughout Saudi Arabia since at least 1992.

Serum, blood, and rectal and nasal swabs were collected from dromedary camels in November-December 2013 from southwestern, western, northwestern, eastern, and central regions of the Kingdom of Saudi Arabia. Of 203 serum samples, 150 (74%) were found to contain antibodies to MERS-CoV. The number of seropositive animals varied from 5% to 95% depending on location and the age of the animals (in general, seropositivity was higher in adult camels compared with young camels). Antibodies against MERS-CoV were also detected in archived serum samples from 1992 through 2010.

These findings indicate that dromedary camels are a reservoir of MERS-CoV. The finding of higher seroprevalence in older camels suggests that younger animals are infected as they are introduced into herds in which the virus is circulating. Proving that infected camels are the source of human infections will require epidemiological investigations of human cases where the infection might have been acquired from camels. If camels indeed spread the virus to humans, it will be important to determine the route. As not all MERS-CoV cases have documented exposure to camels, there should be other routes of infection other than contact with camels, such as through contaminated material or person to person contact.

MERS-CoV has been circulating in dromedary camels in Saudi Arabia since 1992, but it is likely that the virus has been infecting these animals even longer. Camels do not appear to be adversely affected by MERS-CoV infection, a situation often seen when host and pathogen have co-evolved for long periods of time. Whether or not this speculation is correct will require additional work.

I spoke with two of the authors of this new study, W. Ian Lipkin and Thomas Briese, on a special episode of the science show This Week in Virology. You can find TWiV special – MERS-coronavirus in dromedary camels at www.microbe.tv/twiv. During this episode it was revealed that the investigators have propagated infectious MERS-coronavirus from nasal swabs of several dromedary camels.

Middle Eastern respiratory syndrome coronavirus (MERS-CoV), first identified in the fall of 2012 in a Saudi Arabian patient, has since infected over 160 individuals, causing 71 deaths. Identifying the source of infection is important for efforts to prevent further infections. Recently two studies revealed the presence of antibodies to the virus in dromedary camels in Jordan and Saudi Arabia, two countries where large clusters of infections have occurred. Detection of the viral RNA genomeÂ in clinical specimens by polymerase chain reaction (PCR) now provides additional evidence that MERS-CoV can infect camels.

Samples were obtained from all camels (n=14) on a farm where two individuals with laboratory confirmed MERS-CoV infection had been in contact with animals. Nasal swab specimens from three camels were positive when assayed by PCR using MERS-CoV specific primers. Nucleotide sequence analysis revealed that the virus from one camel clustered with sequences obtained from the two farm-associated MERS-CoV infections. Sera from all camels on the farm reacted with MERS-CoV in immunofluorescence and neutralizing assays.

These observations provide strong evidence that MERS-CoV can replicate in camels. However, the authors were not able to isolate infectious virus from camel specimens.Â MERS-CoV has been previously cultured from human clinical specimens, and it is known what types of cells should be used for virus isolation. Levels of virus in the camel specimens might be too low to detect by culturing, or alternatively only fragments of viral genomes might be present, especially if the infection is over.

The authors note that because of the nucleotide sequence similarity between the camel and human viruses, is not possible to determine if the camels were infected by humans, or if humans infected the camels. It is also possible that camels and humans were infected by a third source. Analysis of outbreaks in which the viruses have undergone more extensive sequence divergence should permit establishment of the chain of transmission. If I had to speculate, I would say the virus is going from camels to humans. So far there has been little evidence of seropositivity in humans outside of the known cases, while many camels have antibodies that react with the virus.