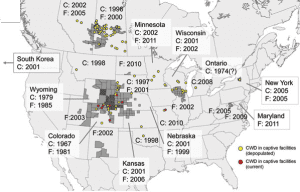 Chronic wasting disease (CWD) is a prion disease of cervids (deer, elk, moose). It was first detected in Wyoming and Colorado, and has since spread rapidlyÂ throughout North America (illustrated; image credit).Â Because prions that cause bovine spongiform encephalopathy (BSE, mad cow disease) are known to infect humans, there is concern that CWD might also cross the species barrier and cause a novel spongiform encephalopathy. RecentÂ experimental results suggest that CWD prions are not likely to directly infect humans.

The prion protein PrPCÂ is encoded by the prnp gene, which is essential for the pathogenesis of transmissible spongiform encephalopathies (TSEs).Â Transgenic mice have been used to understand the species barrier to prion transmission. When mice are inoculated with human prions, few animals develop disease and the incubation periods are over 500 days. When the mouse prnp gene is replaced with the human gene, the mice become uniformly susceptible to infection with human prions and the incubation periodÂ is shorter. TheÂ species barrier to prion transmission is therefore associated with differences in the prion protein sequence between host and target species.

Mice have been used to understand whether CWD prions might be transmitted to humans. Mice are not efficiently infected with CWD prions unless they are made transgenic for theÂ cervid prnp gene. Four different research groups have found thatÂ  mice transgenic for the human prnp gene are not infected by CWD prions. These findings suggest that CWD prions are not likely to be transmitted directly to humans. However, changing four amino acids in human prnpÂ to the cervid sequence allows efficient infection of transgenic mice with cervid prions.

Another concern is that prions of chronic wasting disease could be transmitted to cows grazing in pastures contaminated by cervids. Prions can be detected in deer saliva and feces, and contamination of grass could pass the agent on to cows. In the laboratory, brain homogenates from infected deer can transmit the disease to cows. Therefore it is possible that cervid prions could enter the human food chain through cows.

Although the risk of human infection with CWD prions appears to be low, hunters shouldÂ not shoot or consume an elk or deer that is acting abnormally or appears to be sick, to avoid the brain and spinal cord when field dressing game, and not to consume brain, spinal cord, eyes, spleen, or lymph nodes. No case of transmission of chronic wasting disease prions to deer hunters has yet been reported.