After the governors of New York and New Jersey decided that health workers who have returned from the Ebola virus outbreak in West Africa should be subject to a 21-day quarantine, two Nobel laureates entered the fray. Bruce Beutler feelsÂ that the quarantine is the right thing to do, while Peter Doherty says itâ€™s wrong. Which laureateÂ is right?

The key issue in this debate is the assumption that someone who has been infected with Ebola virus, and does not display symptoms, is not contagious. Beutler doesnâ€™t believe that there is enough evidence for this assumption: “People may have said that without symptoms you canâ€™t transmit Ebola. Iâ€™m not sure about that being 100 percent true. Thereâ€™s a lot of variation with viruses.â€ (source: NJ.com). On the other hand, Doherty says “the evidence-based consensus among the professionals seems to be that this is not necessaryâ€ (source: NJ.com).

As Iâ€™ve written before, our knowledge of the non-contagious nature of Ebola virus infected patients is based on experience with previous outbreaks. Â To make sure I wasnâ€™t missing anything that Beutler had noted, I examined the published summaries of the previous outbreaks of Ebolaviruses. There have been 24 outbreaks caused by these viruses, summarizedÂ in a table by CDC. Â In poring over the outbreak data, I looked for information on how the virus is transmitted. These data areÂ typically obtainedÂ by interviewing Ebola virus patients or their families, and constructing chains of transmission – who infected who, and how the infection was transmitted. Because it is not always possible to determine exactly how transmission took place, the interviewers attempt to determine what kinds of activities are most associated with acquiring infection. These activities are called â€˜risk factorsâ€™.

I was particularly interested in determining if the following was a risk factor in any of the 23 previous outbreaks: some type of contact with a healthy person who subsequently developed Ebola hemorrhagic fever (EHF). I didnâ€™t find any. All transmissions that could be assessedÂ involved an obviously sick individual, and never from anyone who was healthy.

The first two recognized outbreaks of infection were in 1976 in Zaire (Ebola virus) and in Sudan (Sudan virus). The former comprised 318 cases, and infection was spread by close contact with patients and by using contaminated needles. The Sudan oubreak of 284 cases started in workers of a cotton factory, and was amplified by transmission in a hospital. Transmission required close contact with an acute case, usually the act of nursing a patient.

Sudan, 1979 (Sudan virus, 34 cases) The index case worked in a textile factory. Virus was then introduced into 4 families from the local hospital. Every case, except the index patient, could be traced to a human source of infection. Twenty-nine cases occurred in chains of secondary spread in 4 families, all from direct physical contact. No illness was observed among persons who were exposed to cases in confined spaces, but without physical contact.

Gabon, 1994 (Ebola virus, 52 cases) This outbreak began in three different gold mining camps. A second wave of infections outside the camp was initiated by contact with a hospitalized patient from first wave.

DRC, 1995 (Ebola virus, 315 cases) The index case was a charcoal worker, with no known contacts with other EHF patients, probably infected in a charcoal pit or on his farm. He infected 3 members of his family and 10 secondary cases occurred among his family members. Some of these individuals introduced virus into a maternity hospital, and then a general hospital. Prior contact with a suspected patient was reported by 93.5% (159/170) of case-patients for whom data were available. Eleven patients reported receiving an injection within 3 weeks of symptom onset. No role for airborne transmission was observed in human-to-human transmission. Sleeping in the same room with patient not a risk factor.

Gabon, 1996 (Ebola virus, 37 cases) A chimpanzee found dead in the forest was eaten by people hunting for food. Eighteen people who were involved in butchering the animal became ill. Ten other cases occured in their family members. Of 190 individuals who contacted sick people, none developed EHF.

Gabon, 1996-97 (Ebola virus, 60 cases) The index case was a hunter who lived in a forest camp. A dead chimpanzee found in the forest at the time was determined to beÂ infected with Ebola virus. Disease was spread by close contact with infected persons. This outbreak was not well documented.

South Africa, 1996 (Ebola virus, 2 cases) A nurse in South Africa developed EHF; she had been previously exposed to the blood of a sick doctor brought from Gabon. This doctor had treated EV infected patients.

Uganda, 2000-2001 (Sudan virus, 425 cases)Â The three most important risk factorsÂ identified: attending funerals of EHF patients; interfamilial or nosocomial transmission. Â The source of infection of primary patients could not be identified. The transmission risk factors among 83 contacts were determined. The most important risk factor was direct repeated contact with a sick personâ€™s body fluids, as occurs during care. Risk of infection was higher during late stage of disease. Simple physical contact with sick person was neither necessary nor sufficient for developing EHF. Transmission through contaminated fomites is possible – such as sleeping on the same mat, or sharing meals with a sick person. Having washed the clothing of a sick person was not a risk factor. There was no evidence for airborne transmission during this outbreak – sleeping in the same hut as an infected person was not a risk factor.

Gabon, 2001-2002 and Republic of Congo (Ebola virus, 65 and 67 cases, respectively)Â  All but two cases were linked to recognized chains of transmission. There were six different introductions of virus into humans during the outbreak, each related to a hunting episode. An unusually high number of animals were found dead in the rainforest at this time, mainly gorillas, chimps, and monkeys. Ebola virus was detected in the carcass of a gorilla that had been butchered by one of the index cases shortly before onset of illness. The vast majority of secondary cases were related to community based transmission, and health care workers caring for infected patients included.

Republic of Congo 2002-03 (Ebola virus, 143 cases)Â  Risk factors in this outbreak were determined to be participating in the funeral/burial ritual of a patient, and providing nursing care to an individual with EHF. Quote from the paper: â€˜There is no contamination by air or just handshakeâ€™.

Republic of Congo 2003 (Ebola virus, 35 cases)Â  Risk factors in this outbreak were determined to be participating in the funeral/burial ritual of a patient, and providing nursing care to an individual with EHF.

Sudan, 2004 (Sudan virus, 17 cases)Â  Risk factors in this outbreak were determined to be participating in the funeral/burial ritual of a patient, and providing nursing care to an individual with EHF. There was one introduction of virus into the index case-patient, who had been hunting baboons in forest, and was in contact with fresh monkey meat 5 days before onset of symptoms. All cases were epidemiologically linked, with 4 generations of transmission observed.

Democratic Republic of Congo, 2007 (Ebola virus, 264 cases) Index case-patient bought freshly killed fruit bats from hunters for consumption. She infected 11 family members who provided care, who in turn passed infection to others in a chain of transmission.

Uganda 2007-08 (Bundibugyo virus, 149 cases)Â Identified a chain of transmission from a prominent individual in the community to 27 others; they had contact with him before or after his death.

I did not find risk factor analysis for outbreaks in Democratic Republic of Congo, 2008-2009 (Ebola virus, 32 cases) ; Uganda, 2012 (Sudan virus, 11 cases; and Democratic Republic of Congo, 2012 (Bundibugyo virus, 36 cases). Transmission studies on the recent Ebola virus outbreak in West Africa has not yet been published. However the recent outbreak of Ebola virus in Nigeria was traced from an index case who traveled there from Liberia, where he had cared for a sibling who died of EHD. Upon receiving medical attention in Nigeria, he infected health care workers and the disease spread further. Few of the 898 contacts linked to this index case became infected.

I am aware that not all of the cases in these outbreaks could be traced and assigned risk factors for infection. One could argue that among these cases, some might have been acquired by contact with an individual in the incubation period. However it makes no sense that these individuals would have been missed in all of the outbreaks. The more likely conclusion is that during the incubation period, patients infected with Ebola virus are not contagious.

There is one more piece of information to support the conclusion that there is no transmission during the Ebola virus incubation period. During the Ebola virus outbreak of 2000-2001 in Uganda, blood samples were collected from health care workers who became symptomatic with EHF; of these, 27 died and 18 survived. Ebola virus RNA could be detected in the blood on the first day that symptoms were observed, at levels just above the detection threshold (illustrated; image credit). Each day thereafter, the virus load increased, much more substantially in patients with a fatal outcome. While no viral loads were determined before the onset of symptoms, it is reasonable to predict that viral loads would be even lower. This conclusion is consistent with the observation that infected patients do not transmit infection before the onset of symptoms, probably because the levels of virus that they produce are too low. The results of this study are also consistent with observations from some outbreaks that the risk of transmission is increased later in disease, when more virus is present in the blood.

These data lead to the conclusion that Ebola virus transmission does not occur during the incubation period. Therefore it is not necessary to quarantine thoseÂ who might have had contact with Ebola virus infected individuals. Daily reporting of temperature and other vital signs should be sufficient to allow detection of the onset of disease.

In other words, I disagree with Dr. Beutlerâ€™s statement that there are no good data supporting lack of Ebola virus transmission during the incubation period. The fact that Dr. Doherty disagrees with Dr. Beutler just goes to show that having a Nobel Prize doesnâ€™t mean you are always right. 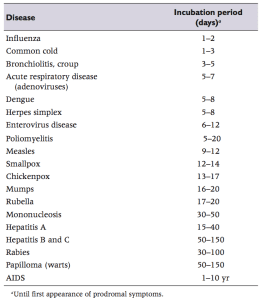 The timeÂ before the symptoms of a viral infection appear is called the incubation period. During this time,Â viral genomes are replicating and the host is responding, producing cytokines such as interferon that can have global effects, leading toÂ the classical symptoms of an acute infection (e.g., fever, malaise, aches, pains, and nausea). These symptoms are called the prodrome, to distinguish them from those characteristic of infection (e.g. paralysis for poliovirus, hemorrhagic fever for Ebolaviruses, rash for measles virus).

In contrast to Ebolaviruses, poliovirus and norovirusÂ areÂ shed during the incubation period – in the feces, where theyÂ can infect others.

The table was taken from the third edition of Principles of Virology. Missing from the table (which will be corrected in the next edition) is the incubation period of Ebola virus, which is 2 to 21 days. I would also argue that the incubation period of HIV is not 1-10 years, but 2-4 weeks, the time until the prodromal symptoms occur. The characteristic symptom of HIV-1 infection, immunosuppression, occurs much later.