The TWiVumvirate reviews this years crop of Nobel Prizes, and how cells prevent leakage of mitochondrial double-stranded RNA into the cytoplasm, which would otherwise lead to the production of interferon. 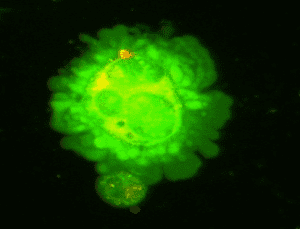 A recent study by scientists at the Ludwig Center for Cancer Immunotherapy offers a new, multifaceted therapy for destroying tumors. A team of researchers led by Dmitriy Zamarin combined checkpoint blockade, a technique aimed at enhancing antitumor immune responses, with oncolytic viral therapy, a technique that uses viruses to kill tumor cells. By employing the two immunotherapies together, the researchers had more success in destroying tumor cells than they have had while investigating each therapy independently.

While checkpoint blockade has been effective as a therapy against some tumors, its major drawback seems to be an inability to destroy strongly immunosuppressing tumors that evade immune system detection. While many oncolytic viruses have also had success as antitumor agents, their impact thus far has been limited to locally restricted tumors. Scientists major concern about oncolytic viruses has thus been whether they must be injected at all possible tumor sites in order to combat metastatic tumors. In an innovative approach aimed at overcoming the weaknesses of the two independent therapies, Zamarin and his team were able to destroy previously resistant tumor cells.

The researchers initially injected mice with melanoma tumor cells, followed by injection of Newcastle disease virus (NDV) directly into these tumor sites. Newcastle disease virus is an avian virus that is non-pathogenic in humans and capable of inducing a robust immune response. Initial injection of NDV resulted in a pronounced inflammatory response in the mice, with increased activation of both innate and adaptive players of immunity. What is perhaps most striking about the data is that despite direct injection of NDV at a local tumor site, increased inflammation was also observed in sites distal and contralateral to tumor injection. The researchers noted tumor growth delay at sites both local and distant to sites of injection, indicating a potential for use of NDV in targeting metastatic tumors. While this observation was certainly promising, the researchers noted that complete, long-term destruction of distant tumor cells was seen in only 10% of animals. The researchers attributed this low level to the increased immunosuppression performed by the distant tumors. This suggestion was based on their observation that the distant tumor sites exhibited increased activity of CTLA-4 cells, which down-regulate the immune system.

While a more traditional, unilateral approach employing oncolytic viruses would have stopped here, the researchers instead proceeded to couple NDV injection with antibodies to CTLA-4 cells. They hypothesized that because NDV caused an increased level of inflammation at distant tumor sites, the anti-CTLA-4 antibodies might have more of an effect if they had been administered without NDV. Indeed, the researchers found that NDV coupled with anti-CTLA-4 resulted in long-term tumor suppression at sites both local and distant to NDV injection. By increasing the inflammatory response via NDV injection, they made the immune cells more receptive to the anti-CTLA-4 antibodies. Through a combination of oncolytic virus therapy and checkpoint blockade, the researchers overcame the limitations faced when each one is employed independently.

What is perhaps most promising about this therapy is that it has also proved effective against tumors that have previously shown resistance to oncolytic viral therapies. For example, TRAMP C2 prostrate adenocarcinoma cells previously showed resistance to lysis by NDV in vitro, unlike the melanoma cells discussed above. Yet, despite this resistance, when both therapies were employed on the adenocarcinoma cells in vivo, researchers noted distant tumor regression and long-term survival, just as they did with the melanoma cells. When they examined these adenocarcinoma cells in vitro, they noted an increased inflammatory response. They noted an up-regulation of MHC I molecules in all cells, even cells that were not infected with NDV. MHC I cells are important players of the immune system, responsible for presenting fragments of virus at the surface of infected cells so that the body can recognize when a cell is infected and subsequently destroy that cell. By demonstrating that a tumor cell does not need to be permissive to a virus in order to be a target for therapy, Zamarinâ€™s approach greatly expands the potential applicability of NDVs and other oncolytic viruses. It seems that what is most important to tumor suppression is the virus-generated inflammatory response and the increased tumor immogenicity that this approach facilitates.

The clinical potential of this double-therapy in humans is particularly exciting to me, especially in light of the fact that both oncolytic therapies and checkpoint blockade have independently been successful in combating tumors in humans. This observation certainly suggests that the two therapies may prove even more effective when combined in humans. Indeed, such a clinical trial is already underway in humans; a current study is studying the effects of ipilimumab, a CTLA-4 target, administered with a herpes simplex oncolytic virus, in the treatment of melanoma. It will be interesting to see how the double-therapy plays out in a human population, and how these results affect the future use of oncolytic viruses.