The TWiV team reviews the first FDA approved gene therapy, accidental exposure to poliovirus type 2 in a manufacturing plant, and production of a candidate poliovirus vaccine in plants. 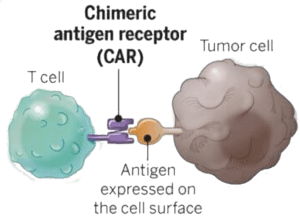 The US Food and Drug Administration recently approved the first gene therapy, Kymriah, to treat B-cell acute lymphoblastic leukemia. It uses a lentivirus to modify the patient’s T cells to kill tumor cells.

Acute lymphoblastic leukemia, or ALL, is caused by uncontrolled growth of B cells, which normally produce antibodies to fight off infections. It is the most common cancer in children. The uncontrolled production of these cells by the bone marrow causes a shortage of blood cell production, leading to fever, increased risk of infection, and anemia. These B cells have on their surfaces a protein called B19 – which is the key to understanding how Kymriah works.

The therapy begins with drawing blood from the patient, from which T cells are purified. These T cells are then infected with a lentivirus vector that encodes the gene for a chimeric antigen receptor (CAR) that recognizes the B19 protein. The CAR protein is synthetic – it doesn’t exist in any cell. The extracellular domain consists of a single-chain antibody directed against the B19 protein (pictured). The cytoplasmic domain of the protein contains sequences that stimulate the T cells to proliferate.

After the T cells are infected with the CAR-encoding lentivirus, they are infused back into the patient. Upon encountering a B cell producing B19, the T cells bind to the protein and kill the cells, thus eliminating the cancer.

Kymriah was licensed by the FDA after testing showed it was effective, leading to remission of cancers in the majority of children treated. But the price tag is steep – $475,000 for a treatment, and other similar drugs in the pipeline could be even more expensive. The drug makers justify the high price by arguing that it reflects the value to the patient – it saves their lives.

But vaccines also save lives, and they cost much less than Kymriah. The difference, of course, is that vaccines are given to millions of people. Kymriah, in contrast, would be given to thousands in the US.

In other words, the high cost of Kymriah reflects the need of drug companies to recoup their high investment in developing and testing the drug – not the value to the patient. Â Rather than spinning a false story about the value of a drug to a patient, the drug companies should be honest about the pricing of their products. No wonder the public has aÂ negative image of the industry.