On episode #347 of the science show This Week in Virology,Â Vincent, Alan, and Rich discuss the virus behind rose rosette disease, and fatal human encephalitis caused by a variegated squirrel bornavirus. 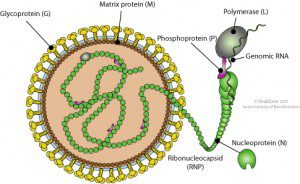 The chromosomal DNA of several mammals has been found to contain sequences related to the nucleoprotein (N) gene of bornaviruses, enveloped viruses with a negative-strand RNA genome.Â I am amazed by this finding. How did bornaviral DNA get in our chromosomes, and what is it doing there?

The bornaviral RNA genome is not known to be copied into DNA at any stage of the viral replication cycle.Â Among viruses with RNA genomes, only the retroviruses are known to slip their genetic information into chromosomal DNA. They do so by producing a DNA copy of their RNA genome by using a viral enzyme called reverse transcriptase. The viral DNA then integrates into the hostâ€™s genome, becoming a permanent part of the cell.

These events have no counterparts during replication of bornaviruses. The RNA genomes of these viruses are copied via an RNA intermediate. Yet when cultured cells are infected with bornavirus, a DNA copy of the viral genome can be detected. Based on the sequence of the integrated bornavirus DNA, it seems likely that the N protein mRNA was copied by the reverse transcriptase activity encoded by retrotransposons such as long interspersed nucleotide elements (LINEs). Retrotransposons are sequences related to retroviruses that are found in the genome of many organisms. They may be retroviral progenitors, or degenerate forms of these viruses. Retrotransposons are amazingly abundant: they comprise 42% of the human genome.

How did bornavirus DNA enter the mammalian genome? In cells infected with bornavirus, viral mRNA encoding the N protein was probably copied by cellular reverse transcriptase into DNA. The bornaviral N protein DNA then integrated into the host genome. Of course, in order for viral DNA to become stably integrated into chromosomal DNA, the cell must not be killed by viral infection. The bornavirus infectious cycle is consistent with becoming a permanent part of the cell: infection is not cytolytic, and leads to a persistent infection during which small amounts of virus are produced.

One of the most amazing implications of this finding is that RNA viruses are very, very old. The results of phylogenetic analyses of the bornaviral N DNAs in different mammalian species suggest that bornaviruses have co-existed with primates for at least 40 million years. Only retroviruses were previously known to have existed millions of years ago. This is an important finding because other predictions about the origins of RNA viruses – based on a ‘molecular clock’ with an average rate of nucleotide substitutions per year – have suggested that RNA viruses originated only about 50,000 years ago.

Perhaps the most intriguing question is the role of endogenous viral elements in the mammalian chromosome. It was previously known that 8% of the human genome is made up of endogenous retroviruses, and the human LINE-1 retrotransposon comprises 20% of human DNA. In my view, such sequences must have a functional role, or they would not have been maintained in the genome for millions of years. They are known to affect the human genome by causing insertion mutations and genomic instability, and by altering gene expression.Â However, many believe that genomes contain nonessential ‘junk’ DNA of no consequence.

Bornaviruses are agents of a neurological disease of farm horses. The name originates from Borna, Germany, where outbreaks of the disease occurred in 1885. The virus also causes disease in sheep and more rarely in cattle, goats, rabbits, and dogs. The results of serological surveys indicate that humans are infected with bornavirus, but the clinical consequences are controversial. Infection with bornavirus has been associated with neuropsychiatric disorders such as schizophrenia, as well as chronic fatigue syndrome, multiple sclerosis, and motor neuron disease. The association with human disease is consistent with the observation that experimentally infected animals display behavior reminiscent of human neuropsychiatric disorders.

Although I am astounded by these findings, I should not have been surprised. DNA copies of the arenavirus RNA genome have also been found integrated into the chromosomal DNA of infected cells, an observation we discussed one year ago.

Vincent, Alan, and Matt discuss a project to study the RNA virome of Northeastern American bats, failure to detect XMRV in UK chronic fatigue syndrome patients, and DNA of bornavirus, an RNA virus, in mammalian genomes.

This episode is sponsored by Data Robotics Inc. To receive $50 off a Drobo or $100 off a Drobo S, visit drobostore.com and use the promotion code VINCENT.