On episode #195 of the science show This Week in Virology, the complete TWiV team meets with Ken Stedman to discuss the discovery in Boiling Spring Lake of a DNA virus with the capsid of an RNA virus. 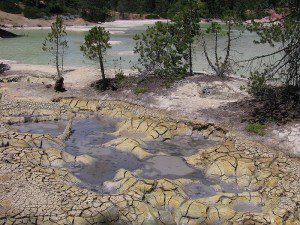 The new virus was identified during a study of viral diversity in an extreme environment, Boiling Spring Lake. You would never want to swim there: it is acidic (pH 2.5) and hot (52Â° âˆ’ 95Â° C). But the lake is not devoid of living things: it is inhabited by various bacteria, Archaea, and unicellular eukaryotes. Where there is life, there are viruses, which leads us to an expedition to determine what kinds of viruses can be found in Boiling Spring Lake.

To answer this question, Goeff Diemer and Kenneth Stedman sequenced viral DNA extracted from purified viral particles from Boiling Spring Lake water. Their analyses revealed the presence of a virus with a circular, single-stranded DNA genome similar to that found in members of the Circoviridae (this virus family includes porcine circovirusÂ and chicken anemia virus). What surprised the investigators was that the gene encoding the viral capsid protein was similar to that from viruses with single-stranded RNA genomes, including viruses that infect plants (Tombusviridae) or fungi. The authors call it â€˜RNA-DNA hybrid virusâ€™, or RDHV. The host of RDHV is unknown but could be one of the eukaryotes that inhabit Boiling Spring Lake.