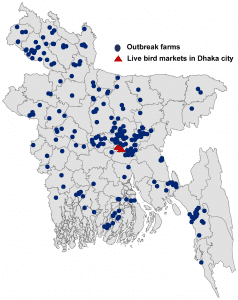 When virologists Fouchier and Kawaoka were isolating avian influenza H5N1 viruses that could transmit among ferrets by aerosol, there was consternation from some quarters that such viruses might escape from the laboratory and cause a pandemic in humans. Part of the fear came from the fact that the case fatality ratio for human infections with the H5N1 virus exceeds 50%. This number could be substantially higher than the lethality ratio, which is the number of symptomatic cases divided by the total number of infections. Divining the latter number has been difficult. Results of aÂ meta-analysis published in 2012 suggest that H5N1 seropositivity approaches 1-2% in certain populations. Others have concluded that these studies are flawed, clouded by false positives and cross-reacting antigens. Recently two additional studies have been published that contribute to this discussion.

The first paper is a case report of subclinical avian influenza H5N1 virus infection in a Vietnamese household in which family members were involved in slaughtering, preparing, and consuming chickens, and birds were permitted to roam freely in the sleeping area. Four chickens from this household were found to be positive for H5N1 virus by polymerase chain reaction (PCR) of throat and cloacal swab specimens. The 40-year old father died after a severe four day respiratory illness requiring hospitalization; H5N1 viral RNA was detected by PCR of a throat swab on day 3 of illness. A throat swab from his daughter, taken 6 days after she had killed a chicken, was positive by PCR, and H5N1 virus was recovered by inoculation of cell cultures. Her hemagglutination-inhibition (HI) titer, a measure of anti-viral antibodies, increased from <20 to 160, but she showed no signs of illness, perhaps because she was treated with oseltamivir from day 5 of her father’s illness.

The authors note the difficulty in detecting subclinical H5N1 infections:

…it is unclear whether serologic testing reliably detects subclinical cases. According to the World Health Organization,MN (microneutralization) titers >80 are indicative of infection but must be confirmed by a second serologic test because of the possibility of cross-reactivity. The interpretation of results from a single serum sample is limited by the specificity or sensitivity of serologic tests, and viral shedding times may mean that infected cases may be missed.

The second studyÂ examinedÂ seroprevalence of anti-H5N1 virus antibodies in poultry workers in Bangladesh. Sera were collected in 2009 from poultry workers on farms (212 from 87 farms) and live bird markets (210 from 3 markets). Some of the farm workers (91%) reported handling sick animals during laboratory-confirmed H5N1 outbreaks. Sera were screened for antibodies to H5N1 virus by two methods: microneutralization and hemagglutination-inhibition. None of the individuals were seropositive for anti-H5N1 virus antibodies.

I have several reservations about this study. Although H5N1 virus was identified on the poultry farms whose workers were sampled, the sera were drawn from 22 to 543 days after the onset of poultry deaths. If any of the workers had been infected with H5N1 virus, anti-viral antibody titers might have already declined by this time. Although the sera were examined for anti-viral antibodies by two different tests, paired sera were not used, as recommended by the authors of the first paper discussed above.

Therefore the answer to the question ‘what is the fatality rate of influenza H5n1 virus infections in humans?’ still cannot be answered. As the authors of the first paper conclude: 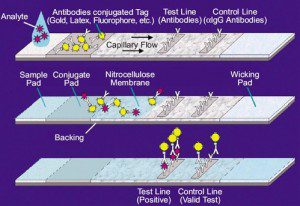 Last week the US Food and Drug Administration approved a rapid test for determining whether a person is infected with an H5N1 subtype of influenza virus. Why is it better than previously available influenza diagnostic assays?

The format of the new assay, according to its developer, ArborVita, “is the familiar lateral-flow rapid antigen assay”. This type of diagnostic test is often designed to detect the presence of a protein in a clinical specimen, and is simple enough to be performed at home or in a physician’s office. The test sample is applied to a solid substrate, often a thin strip of nitrocellulose held in a plastic frame (illustrated). The nitrocellulose is impregnated with antibodies directed against the protein which is being assayed. These antibodies are labeled with colored latex or gold spheres to permit visual readout of the assay. The same antibody, minus the colored spheres, is bound along a line further down the nitrocellulose strip. When the clinical sample is applied to one end of the strip, it migrates by capillary action towards the opposite end. A protein that reacts with the labeled antibodies will also be bound by the immobilized antibodies as the complex moves down the strip. The result is a visible colored line on the filter indicating that protein is present in the sample. If no substance is bound to the antibody, it will move past the immobilized antibody and no color will develop.

A well-known example of a lateral-flow rapid antigen assay is the home pregnancy test, which is designed to detect human chorionic gonadotropin in urine.

The lateral-flow assay format has been used previously to detect influenza virus in clinical specimens, and depends on the presence of a viral protein called NP. Because the test involves the reaction of antibodies with proteins, it takes several hours to develop. Furthermore, the the kit must be refrigerated because antibodies lose activity at higher temperatures.

The new test for influenza H5N1 is novel because it does not depend upon an antibody-antigen reaction. Rather it uses the fact that another viral protein, called NS1, contains a binding sequence for a PDZ domain, a common structural motif found in many different proteins. PDZ domains bind with high specificity to short peptide sequences found in the carboxy-terminal regions of proteins. They are scaffolding proteins that play roles in signaling pathways involved in a variety of cell functions including membrane trafficking and cell polarity.

Examination of the protein sequences from many avian influenza virus isolates identified a PDZ ligand at the carboxy-terminus of NS1. The results of biochemical assays then showed that NS1 proteins from avian influenza viruses react with PDZ domains. Because the C-terminal region of the NS1 protein differs for each influenza subtype, a PDZ protein with high affinity for the NS1 protein of H5 viruses was selected for the assay. The NS1-specific PDZ domain is used in place of the antibody to capture the viral protein from clinical samples, such as a throat or nose swab. It is faster (40 minutes versus several hours) than antibody-based tests and does not require refrigeration.

The new assay is a simple, rapid, and stable test that can be used in many settings to monitor infection of humans with influenza H5N1 viruses. It is also a wonderful example of how unexpected research findings – in this case the discovery of a PDZ ligand in the viral NS1 protein – may lead to novel and effective clinical diagnostic reagents.