The common cold is an infection of the upper respiratory tract that may be caused by many different viruses, but most frequently by rhinoviruses. A compound that inhibits a cell enzyme and blocks rhinovirus replication has the potential to be developed into an antiviral drug (link to paper).

END_OF_DOCUMENT_TOKEN_TO_BE_REPLACED

Visit the virology W3310 home page for a complete list of course resources. 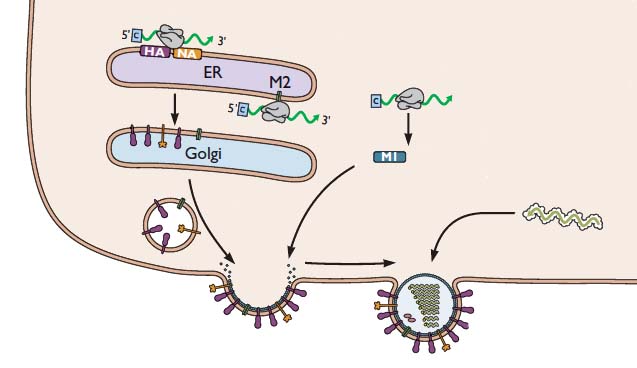 The (-) strand viral RNAs that will be packaged into new virus particles are produced in the cell nucleus, then exported to the cytoplasm. These RNAs are joined with the viral proteins PA, PB1, PB2, and NP. Viral proteins other than HA, NA, and M2 are produced by translation on free ribosomes, as shown for M1. The latter protein binds to the membrane where HA, NA, and M2 have been inserted. The assembly consisting of viral RNAs and viral proteins – called a ribonucleoprotein complex or RNP -Â  travels to the site of assembly. The virion then forms by a process called budding, during which the membrane bulges from the cell and is eventually pinched off to form a free particle.