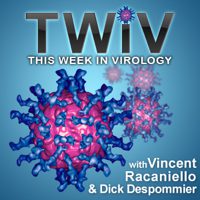 On This Week in Virology #18, Vincent, Dick, and Alan discuss adenovirus type 36 and obesity, new influenza antiviral drugs, viral hemorrhagic septicemia virus of fish, and Ebola virus in pigs and pig farmers in the Phillipines. 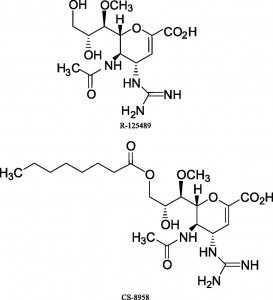 So far we have Â three antiviral drugs against influenza viruses. Most H3N2 strains are resistant to rimantidine, which targets the viral M2 ion channel, although it is still effective against H1N1 strains. There are two neuraminidase (NA) inhibitors: oseltamivir (Tamiflu) and zanamavir (Relenza). The latter is effective against H1N1 and H3N2 strains, but widespread resistance of H1N1 strains to oseltamivir has emerged. Clearly a deeper anti-influenza pipeline is needed.

The news is good: there are a number of promising new NA inhibitors in development. One is CS-8958, a modified version of R-125489 produced byÂ Daiichi Sankyo Co. by adding an acyl chain to the 3-O position. The two drugs were tested in NA inhibition assays against a wide variety of H1N1, H3N2, and influenza B viruses. Importantly, CS-8958 was also found to inhibit NA activity of oseltamivirÂ resistantÂ H1N1, H3N2 and B patientÂ isolates. CS-8958 also significantly improved survival of mice infected with a mouse-adapted H1N1 strain.Â Interestingly, CS-8958 protected mice when administered up to 10 days before infection. Zanamavir was protective when given to mice no earlier than 1 day before infection. These results may not translate to humans, but in the best of circumstances, CS-8958 might have prophylactic value in treating influenza. This property is useful for controlling outbreaks in communities and institutions.

Another promising NA inhibitor is A-322278, a modified version ofÂ A315675, a pyrrolidine-based compound developed by Abbott Laboratories.Â A315675 has been shown to be as active against H1N1 and H3N2 strains as zanamavir and oseltamivir. In the study cited below, the effect of the drug on mortality rates, mean weight loss, mean days of death, and lung viral titers was assessed.Â A-322278 was shown to protect mice against challenge with both wild type H1N1 virus and theÂ oseltamivir resistantÂ NA mutant H274Y.Â

VaccinesÂ haveÂ providedÂ considerableÂ successÂ inÂ preventing viral disease, but they have modest or no therapeutic effect for individuals who are already infected. Consequently, our second arm of antiviral defense has been the development and use of antiviral drugs: they can stop an infection once it has started.

However, despite 50 years of research, our arsenal of antiviral drugs is dangerously small. Only about 30 antiviral drugs are available on the US market, most against herpesviruses and HIV-1. There are many reasons for this paucity of antiviral drugs. Compounds interfering with virus growth can adversely affect the host cell, leading to unacceptable toxicity. Many medically important viruses are dangerous, cannot be propagated in the laboratory or tested in animal systems. Another requirement often difficult to fulfill is that the drugs must completely block virus replication. Many acute virus infections are of short duration; by the time the patient feels ill, virus replication is declining.

Perhaps the most important problem is the emergence of drug-resistant mutants. High mutation rates among the RNA viruses preclude the use of antiviral drugs, with the exception of HIV-1. Given the magnitude of global infection with HIV-1, many antivirals have been developed which target different viral proteins. These drugs are used in various combinations of three, reducing the problem of drug resistance. The mutation rates among DNA viruses are orders of magnitude less than for RNA viruses, explaining the availability of inhibitors of herpesviruses. Nevertheless, resistance to anti-herpesvirus drugs do occur.

Recently several groups have explored the development of new antiviral drugs that target not viral proteins, but host proteins essential for viral replication. The idea is that direct mutation of the drug target is not possible. Unfortunately, resistance to such drugs has been observed. Brefeldin A inhibits poliovirus replication by interfering with the cellular secretory apparatus. Resistance to the drug is achieved by amino acid changes in viral proteins that modulate cellular secretion. Similarly, herpes simplex virus can become resistant to an antiviral drug that targets a nuclear export factor. These and other examples suggest that the strategy of targeting a cellular protein may not preclude the development of viral resistance.

A paper published in 2007 in Genes and Development provides some hope for this approach. The authors show that an inhibitor of the cellular protein Hsp90, a drug called Geldanamycin, blocks poliovirus replication. This cellular protein is apparently required for proper folding of the viral capsid protein precursor, P1. Despite extended attempts, the authors were not able to isolate poliovirus mutants resistant to Geldanamycin. The drug also blocked poliovirus infection of mice, and again no resistant mutants were found. Because Geldanamycin derivatives are currently being tested in humans for anti-cancer activity, they may soon be evaluated for their antiviral properties.