These individuals were likely resusceptible to reinfection with the same strain of influenza virus due to a confluence of unusual events. First, all three were reinfected within three weeks, before their primary adaptive response had sufficiently matured. Another contributing factor was the high level of circulation of the pandemic strain. This issue was compounded for patients two and three who probably acquired both infections while in the hospital (called nosocomial transmission).

Could reinfection also occur after immunization with influenza vaccine? Yes, if the immunized individual encounters the virus before the primary antibody response matures, which occurs in 3-4 weeks. This is more likely to occur during pandemic influenza when circulation of the virus is more extensive than in non-pandemic years.

In “Influenza virus attachment to cells” we left the intact virion on the cell surface. The next step is that the viral genetic information – for influenza virus, the individual RNA segments – must enter the cell so that it can be reproduced. The mechanism for influenza virus, illustrated below, involves a step that is a target of the antiviral adamantanes.

The entry of influenza virus into cells is one of the best undertood of all known viral entry mechanisms. After the virion attaches to sialic-acid containing receptors at the cell surface, the virus-receptor complex is taken into cells by endocytosis, a process by which cells normally take up molecules from the extracellular fluid. As the endosomal vesicles that contain the virus particles move towards the cell nucleus, their pH drops. This change in pH is accomplished by a cellular channel that pumps protons (H+) into the vesicle. When the endosomal pH reaches 5.0, the viral HA protein undergoes a conformational rearrangement. This change exposes a fusion peptide on the HA – a short, hydrophobic sequence that inserts into the endosomal membrane and causes it to fuse with the viral envelope. When this occurs, the viral RNAs are released into the cytoplasm. They are then transported into the cell nucleus where viral RNA replication occurs.

In the influenza virion, the viral RNAs are not naked, but bound to a number of viral proteins, including the M1 protein. This protein forms the shell that underlies the lipid membrane of the virion. Unfortunately, if the viral RNAs are bound to M1 protein when they are released from the virion, they cannot enter the nucleus. To get around this problem, the influenza virion has a few copies in its membrane of a protein called M2. This viral protein forms a channel in the membrane that actively pumps protons from the endosome into the interior of the virion. These protons lower the pH in the interior of the virion, releasing the viral RNAs from M1. In this way the RNAs can enter the nucleus.

The M2 ion channel is the target of the antiviral adamantanes, depicted below. These compounds clog the channel and prevent it from pumping protons into the virion. In the presence of adamantanes, viral RNAs remain bound to M1 and cannot enter the nucleus. Therefore viral replication is inhibited. Resistance to adamantanes occurs by changes in amino acids that line the M2 channel. These changes prevent the drug from plugging the channel. 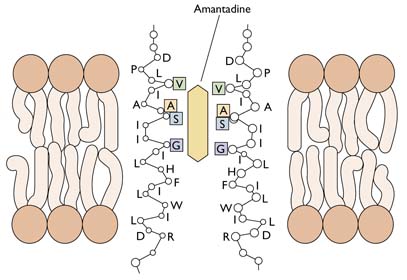 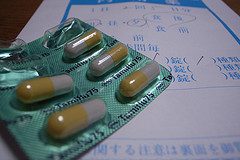