Both Nature and the New York Times have weighed in on the resumption of influenza H5N1 research. In an editorial from 23 January 2013, Nature opines that “Experiments that make deadly pathogens more dangerous demand the utmost scrutiny”:

As several critics point out, the assessments of the relative risks and benefits of such research remain restricted to largely qualitative arguments. The formal, quantitative risk assessment common in the nuclear power and other industries could have helped to nail down and quantify risks, and would have informed the debate better. One year on, an irreproachable, independent riskâ€“benefit analysis of such research, perhaps convened by a body such as the World Health Organization (WHO), is still lacking.

The Times editors, who looked foolish in January 2012 after remarking that the H5N1 ferret transmission research should not have been done*, simply tow Nature’s line.

To clarify a point, the Fouchier and Kawaoka experiments on influenza H5N1 transmission did not make the virus more dangerous – they made itÂ less dangerous for ferrets. How they affect the virus in humans is unknown.

I suspect that no one, not even WHO, has done a quantitative risk-benefit analysis of H5N1 research becauseÂ it cannot be done. What basic research will reveal is frequently unknown – if the outcome could be predicted, then it would not be research. Scientists ask questions, and design experiments to answer them, but the results remain elusive until the experiments are done. How can the benefits be quantified if the outcome isn’t certain?

For example, one of the benefits of influenza H5N1 research is to understand what regulates aerosol transmission of the virus. It is without doubt an important question, but whether or not research will provide an answer is unknown. At best, we might identify the determinants of aerosol transmission in ferrets – but not in humans. I don’t know the solution to this problem – Â should we simply assume that we will get answers to all the questions we ask? Should we conclude that H5N1 research will allow us to understand H5N1 transmission and pathogenesis, thereby leading to vaccines and antiviral drugs or novel therapies? In this case there is no doubt that the benefits of H5N1 research are very high, but I can’t put a number on it.Â Nature calls this a ‘qualitative’ argument. But if someone tried to make a quantitative risk-benefit analysis of H5N1 research it would be fiction.

What is the risk of influenza H5N1 virus research? Many influenza researchers feel that it is low, if work with infectious virus is carried out under the right containment conditions. Perhaps the more relevant question is what is the risk of releasing experimental results that could be used for nefarious purposes. Because H5N1 transmission experiments utilize animal models, the results cannot be directly extrapolated to humans. If a virus is isolated that transmits by aerosol among ferrets, it cannot be concluded that the same virus will transmit among humans. Also remember that gain of aerosol transmission among ferrets was accompanied by a loss of fitness – the altered virus did not cause lethal disease when transmitted by aerosol. It seems unlikely that these research findings could be used to successfully produce a biological weapon.

It seems unlikely that someone intent on producing an H5N1 biological weapon would base it on work done in ferrets, or any other animal model. Their solution would be to passage the virus in humans – an unethical experiment, but which one could imagine being done by unethical individuals. Even the outcome of this experiment would not be assured – no one knows if an H5N1 virus selected for aerosol transmission among humans would have high lethality.

*Without having read the papers, the Times editors decided that the H5N1 ferret experiments should not have been done. When the papers were published we all learned that the modified H5N1 viruses were not lethal to ferrets. 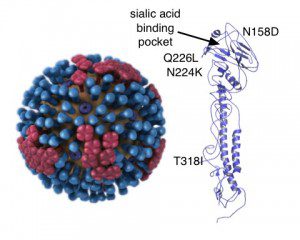 Kawaokaâ€™s group used a random mutagenesis and selection approach to identify amino acid changes in the avian H5 HA protein that allow it to bind human receptors. These changes are located around the sialic acid binding pocket in the HA head (figure). Some of the amino acid changes were previously known, but there are also some new ones reported, expanding our understanding of how the HA binds sialic acids. Some of the HA amino acid changes allow virus binding to ciliated epithelial cells of the human respiratory tract (wild type H5 HA cannot). All of this is important new information.

Is this information useful for the surveillance of circulating H5N1 strains; specifically, would the emergence of these HA changes signify a virus with pandemic potential? I donâ€™t believe so. These are mutations that enhance the transmission of H5 viruses in ferrets, and their effect in humans is unknown. Ferret transmission experiments are not meant to be predictive of what might occur in humans.