Vincent, Kathy and Rich travel to ASM Microbe 2018 in Atlanta where they speak with Stacy Horner and Ken Stapleford about their careers and their research.

You can find TWiV #405 at microbe.tv/twiv, or listen below.

Four virologists discuss our current understanding of Zika virus biology, pathogenesis, transmission, and prevention, in this special live episode recorded at the American Society for Microbiology in Washington, DC.

You can find TWiV #392 at microbe.tv/twiv, or listen/watch below.

Esper Kallas andÂ the Merry TWiXters analyze the latest data on Zika virus and microcephaly in Brazil, and discuss publications on a mouse model for disease, infection of a fetus, mosquito vector competence, and the cryo-EM structure of the virus particle. All on episode #383 of the science show This Week in Virology.

Audio and full show notes forÂ TWiV #383 at microbe.tv/twiv or listen below. 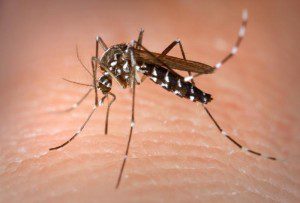 Since its discovery over 50 years ago, infection by chikungunya virus was known to be spread by mosquitoes, primarily Aedes aegypti, which feeds almost exclusively on humans. In 2004, an outbreak of chikungunya disease started in Kenya and spread to islands in the Indian Ocean and finally India, where it had not been reported for 32 years. On RÃ©union, one of the Indian Ocean Islands, nearly 40% of the population of 785,000 fell ill. An outbreak in Italy three years later, the first ever in Europe, was started by an infected traveler from India. Cases of chikungunya have been reported in travelers returning to the US, although transmission within the country has not been reported.

The rapid global movement of chikungunya virus appears to be a consequence of a change in its mosquito vector. Some time during 2005 a virus was selected with a single amino acid change in the envelope glycoprotein which allows efficient replication in Aedes albopictus, the predominant mosquito in RÃ©union. This mosquito was never a good host for chikungunya virus, partly because it bites so many different animal species. The amino acid change enhances viral replication in the mosquito, leading to much higher levels of virus in the salivary gland. Consequently the virus is more likely to be transmitted upon biting a new host.