Cindy, Steph, and Vincent reveal that lymphocyte trafficking through lymph nodes and lymph is circadian – it is dependent on the time of day.

Antibodies produced by infection with a virus, or after immunization with viral vaccines, are effective at preventing viral disease. However humans and higher primates contain “natural antibodies” which are present in serum before viral infection. Natural antibodies can activate the classical complement pathway leading to lysis of enveloped virus particles long before the adaptive immune response is activated.

Many natural antibodies are directed against the disaccharide galactose Î±(1,3)-galactose (Î±-Gal) (illustration), which is found as a terminal sugar on glycosylatedÂ cell surface proteins. Humans, apes, and Old World monkeys lack the gene encoding the enzyme galactosyltransferase,Â which attaches Î±-Gal to membrane proteins. Lower primates, most other animals,Â and bacteria synthesize the disaccharide.

Human serum contains high levels of antibodies specific for Î±-Gal because the human gut containsÂ bacteria that produce this sugar. Over 2% of serum IgM and IgG antibodies are directed against Î±-Gal. This antibody binds to the membrane of enveloped viruses that contain Î±-Gal antigensÂ and triggersÂ the classical complement cascade, leading to lysis of virions and loss of infectivity.

TheÂ anti-Î±-Gal antibody-complement reaction is probably theÂ main reason why humans and higher primates are not infected by enveloped viruses of other animals. Many of these viruses infect human cells efficiently in culture because the complement proteins in serum areÂ inactivated by heating. For example, when vesicular stomatitis virus, human immunodeficiency virus type 2, and human foamy virus are grown in non-human cells which produce Î±-Gal,Â the virions can be inactivated by fresh (i.e. not heat-inactivated) human serum. When the same viruses are propagated inÂ human cells, which lack Î±-Gal,Â fresh human serum has no effect on viral infectivity. Because of these findings, virus vectors for gene therapy are produced in cells lacking galactosyltransferase to avoid complement-mediated inactivation of the viruses in humans.

When strains of mice that cannot produce any antibodies are infected with vesicular stomatitis virus, titers in the kidney and brain are 10-100 times higher than in normal mice. Furthermore, virus titers in lymph nodes are 10-100 times lower than in antibody-producing mice.

Anti-Î±-Gal antibodies are an example of how the adaptive immune system cooperates with the innate complement cascade to provideÂ immediate action before specific anti-viral antibodies are developed. Natural antibodies prevent the spread of viruses to vital organs, and improve immunogenicity by enhancing the trapping of antigen in secondary lymphoid organs such as lymph nodes. 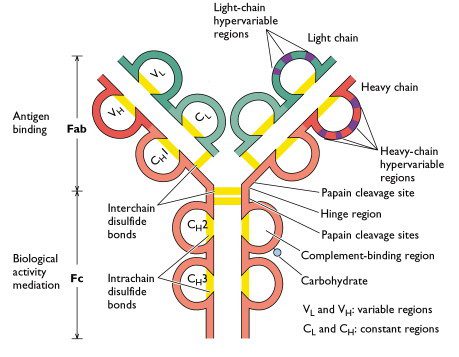 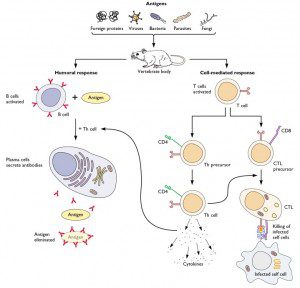 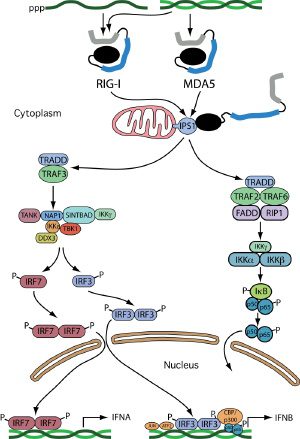 The presence of cytokines in the blood is typically one of the earliest indications that the host has been infected with a virus. Over 80 known cytokines are secreted by infected cells. The first that are produced after viral infection include interferon-Î± and -Î² (IFN-Î±, IFN-Î²), tumor necrosis factor alpha (TNF-Î±), interleukin-6 (IL-6), IL-12, and IFN-Î³.