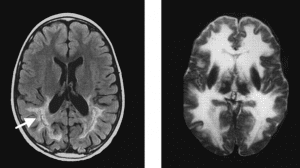 X-linked adrenoleukodystrophy (ALD) is a rare neurologic disease caused by a defect in a gene required for normal ABCD1 transporter function. The lack of this function leads to progressive demyelination, severe neurologic disease and death in males, often in childhood. ALD disease progression can be controlled by allogeneic hematopoietic cell transplantation (HCT) in those patients for whom bone marrow donors can be found. This unusual correction occurs because bone marrow-derived monocyte-macrophages are known to migrate into the central nervous system and form functional microglial cells. These corrected microglial cells provide the patients with cells with normal ABCD1 transporter activity and allow normal myelin function.

Two patients with progressive ALD with no available allogeneic HCT donors were recently treated by lentiviral-mediated gene therapy. A lentiviral vector containing the normal ABCD1 transporter gene coding sequence was integrated into the patients’ own marrow derived hematopoietic stem cells after transduction of defective viral particles into the cells ex vivo. The gene-corrected cells were then re-infused into the patients. Myeloablation of the patients’ own marrow was required (as it is in allogeneic HCT treatment) since the gene-corrected cells have no growth advantage over resident patient cells. In addition, the treatment is necessary to provide marrow space for the new gene-corrected cells.

In both of the treated patients, seven and seven and a half years old, there was significant gene transfer and expression of the corrected ABCD1 protein expressed in transplanted myelomonocytes, the population from which the corrected brain glial cells arise. More importantly, brain MRIs from the two patients (left image) showed no progression of demyelinating lesions than in untreated patients (right image). The clinical neurologic status of one patient improved and, in the other, the patient’s disease was stabilized. Untreated patients usually deteriorate in neurologic function when their disease becomes active.

In all HCT gene therapy, stable integration with viruses is required since expansion of specific hematopoietic cell lineages, (here of monocyte-macrophages), are needed to provide adequate numbers of new corrected cells after extensive cell division. Lentiglobin gene transfer (HIV-based) permits integration of transferred genes into quiescent cells (many hematopoietic stem cells are non-dividing) that must be stably transduced for gene therapy with HCT to be successful. By contrast, a property of previously utilized oncoretroviral or gammaretroviral transfer (largely MLV-based) in human gene therapy is that cell division is necessary for viral integration. Consequently gene transfer into HCT is much less efficient.

The clinical benefit provided by this first reported trial of successful lentiviral gene therapy using hematopoietic stem cells in neurologic disease may provide an impetus for similar approaches to treating other neurological diseases.