Another excellent example of gain of function research is modification of a viral vector to make it more useful for human gene therapy.

Adenovirus associated virus (AAV) is the most commonly used vector for a variety of gene therapy applications, including gene replacement and gene editing. These small viruses, which comprise a single-stranded DNA genome surrounded by an icosahedral protein shell (illustrated), have a number of features that make them useful for gene therapy, including easy manipulation and growth in large quantities, and induction of persistent gene expression for long periods of time. An example is the drug Luxturna which is an AAV vector containing a retinal pigment gene that is used to treat some forms of blindness.

Naturally occurring AAV vectors have some limitations, including the propensity to become sequestered in the liver after systemic injection. Consequently reaching other organs with AAV vectors requires injection of large amounts of recombinant virus, which may be accompanied by toxicity.

A number of approaches have therefore been developed to modify AAV vectors so they preferentially infect other tissues. A number of muscle diseases would benefit from gene therapy and therefore AAV vectors have been developed to target that tissue. In one approach that I described before, ancestral AAV viruses were recovered and shown to efficiently infect muscle cell types.

A more recent approach involved modifying the AAV genome by inserting random stretches of 7 amino acids into the viral capsid protein, infecting mice with large libraries of these variants, and identifying those that best infect muscle. In addition, muscle-specific promoter sequences were also incorporated in the viral genome. After multiple rounds of infection of mice, recovery of viruses from muscle and reinfection, capsids were identified that more efficiently infect muscle tissue and less efficiently infect liver, in multiple mouse strains and in nonhuman primates. The new AAV capsids can rescue two different types of muscle disease in mice: Duchenne muscular dystrophy and X-linked myotubular myopathy after intramuscular inoculation.

The ability of these new AAV vectors to preferentially infect muscle cells depends on the presence of three added amino acids in the viral capsid, RGD. This three amino acid motif is known to bind cell surface proteins called integrins. Indeed, the increased efficiency of these engineered vectors depends on the presence of integrins on target cells.

These findings not only have produced better AAV vectors for targeting muscle tissue, but establish a strategy to engineer viruses to preferentially infect any tissue. The new vectors are the product of gain of function research: the original AAV has been given new properties. This work constitutes another example of the broad potential benefits of gain of function research in virology. 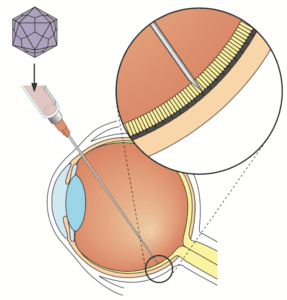 END_OF_DOCUMENT_TOKEN_TO_BE_REPLACED

At the University of ZÃ¼rich, Vincent speaks with virologists Cornel Fraeful, Urs Greber, and Silke Stertz about their careers and their work on AAV2, adenovirus entry, and influenza virus.

From ASV 2017 in Madison, Wisconsin, the complete TWiV team speaks with Mavis Agbandje-McKenna about her career and her work solving virus structures by x-ray crystallography and cryo-electron microscopy.

On episode #350 of the science show This Week in Virology,Â VincentÂ speaks with Katherine High about her career and her work on using viral gene therapy to treat inherited disorders.

This episode is drawn fromÂ one of twenty-sixÂ video interviews with leading scientists who have made significant contributions to the field of virology, part of the new edition of the textbookÂ Principles of Virology. 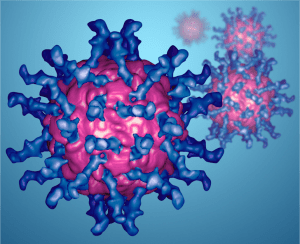 We recently discussed the development of a soluble receptor for HIV-1 thatÂ provides broad and effective protection against infection of cells and of nonhuman primates. Twenty-fiveÂ years agoÂ my laboratory published a paper which concluded that using soluble receptors to block virus infection might not be a good idea. In theÂ first paragraph ofÂ that paper we wrote:

We had previously shown that the cell receptor for poliovirus, CD155, produced in a soluble form, would bind to poliovirus (pictured – the very image from the banner of this blog), blocking viral infection. We then found that it was relatively easy to select for soluble receptor resistant (srr) virus mutants. These viruses still enter cells by binding to CD155, but the affinity of virus for the receptor isÂ reduced. Poliovirus srr mutants replicate normally in cell cultures, and cause paralysis in a mouse model for poliomyelitis. We speculated thatÂ receptor binding might not be aÂ rate-limiting step in viral infection, and short of Â abolishing binding, the virus can tolerate a wide range of binding capabilities.

The amino acid changes that cause the srr phenotype map to both the exterior and the interior of the viral capsid.Â The changes on the virion surface are likely to directlyÂ interact with the cell receptor. Changes in the interior of the virus particleÂ may beÂ involved in receptor-mediated conformational transitions that are believed to be essential steps in viral entry.

WhenÂ this work was done, clinical trials of soluble CD4 for HIV-1 infection were under way. We believed that our findings did not support the use of soluble receptors as antivirals, which we clearly stated in the last sentence of the paper:

These findings temper the use of soluble receptors as antiviral compounds.

HIV-1 mutants resistant to neutralization with soluble CD4 were subsequently isolated, andÂ the compound was never approved to treat HIV-1 infectionÂ in humans for this and other reasons, including low affinity for the viral glycoprotein, enhancement of infection, and problems associated with using a protein as a therapeutic.

Recently a new soluble CD4 was produced which also includes the viral binding site for a second cell receptor, CCR5. This molecule overcomes many of the issues inherent in the original soluble CD4. It provides broad protection against a wide range of HIV-1 strains, and when delivered via an adenovirus-associated virus vector, protects nonhuman primates from infection. This delivery method circumvents the issues inherent in using a protein as an antiviral drug. Because this protein blocks both receptor binding sites on the viral envelope glycoprotein, it might be more difficult for viruses to emerge that are resistant to neutralization. The authors speculate that such mutants might not be efficiently transmitted among hosts due to defects in cell entry. Given the promising results with this antiviral compound, experiments to test this speculation are certainly welcome.