The TWiV hosts review an analysis of gender parity trends at virology conferences, and the origin and unusual pathogenesis of the 1918 pandemic H1N1 influenza virus.

The gain of function experiments in which avian influenza H5N1 virus was provided the ability to transmit by aerosol among ferrets were met with substantial outrage from both the press and even some scientists; scenarios of lethal viruses escaping from the laboratory and killing millions proliferated (see examples here and here). The recent publication of new influenza virus gain of function studies from the laboratories of Kawaoka and Perez have unleashed another barrage of criticism. What exactly was done and what does it mean?

According to critics, virologists should not be entrusted to carry out gain of function studies with influenza virus; they are dangerous and of no scientific value. The headline of a Guardian article is “Scientists condemn ‘crazy, dangerous’ creation of deadly airborne flu virusâ€ (the headline is at best misleading because the influenza virus that was reconstructed by Kawaoka and colleagues is not deadly when transmitted by aerosol). The main opponents of the work appear to be Lord May*, former President of the Royal Society; Harvard epidemiologist Mark Lipsitch; and virologist Simon Wain Hobson. They all have nasty things to say about the work and the people doing it. To his credit, author of the Guardian article Ian Sample (who likely did not write the headline) does present both sides of the study, and attempts to explain what was done. He even quotes Kawaoka on the value of the work. But much is left unsaid, and without a detailed analysis of the study, its importance is not readily apparent.

The work by Kawaoka and colleagues attempts to answer the question of whether an influenza virus similar to that which killed 50 million people in 1918 could emerge today. First they identified in the avian influenza virus sequence database individual RNA segments that encode proteins that are very similar to the 1918 viral proteins.

It is known from previous work that amino acid changes in the viral HA and PB2 proteins are important in allowing avian influenza viruses to infect humans. Changes in the viral HA glycoprotein (HA190D/225D) shift receptor specificity from avian to human sialic acids, while a change at amino acid 627 of the PB2 protein to a lysine (627K) allows avian influenza viruses to efficiently replicate in mammalian cells, and at the lower temperatures of the human upper respiratory tract.

Previous studies have shown that changes in the HA needed for binding to human sialic acid receptors reduced the stability of the HA protein. AdaptationÂ of these viruses to aerosol transmission among ferrets required amino acid changes in the HA that restore its stability. Similar results were obtained in this study of the 1918-like avian influenza virus, namely, that changes that allow binding to human receptors (HA-190D/225D)Â destabilize the HA protein, and changes associated with aerosol transmission (HA-89D and HA- 89D/113N) restore stability.

Examination of influenza virus sequence databases reveals that avian viruses encoding PB2, PB1, NP, M, and NS genes of closest similarity to those of the 1918-like avian virus have circulated largely in North America and Europe. The PB2-627K change is present inÂ 168 of 4,293 avian PB2 genes (4%), and theÂ HA-190D change is in 9 of 266 avian H1 HA sequences (3%), and one also had HA-225D.

Most of the viral sequences used in this work were obtained quite recently, indicating that influenza viruses encoding 1918-like proteins continue to circulate 95 years after the pandemic. Â Now that we have discussed the work, we can summarize why it is important:

Do these experiments constitute an unacceptable risk to humans? Whether or not the 1918-like avian influenza virus, or its transmissible derivatives, would replicate, transmit, and cause disease in humans is unknown. While ferrets are a good model for influenza virus pathogenesis, they cannot be used to predict what will occur in humans. Nevertheless it is prudent to work with these avian influenza viruses under appropriate containment, and that is how this work was done. The risk is worth taking, not only because understanding transmission is fundamentally important, but also because of unanticipated results which often substantially advance the field.

The Guardian quotesÂ LipsitchÂ as saying thatÂ “Scientists should not take such risks without strong evidence that the work could save lives, which this paper does not provideâ€. The value of science cannot only be judged in terms of helping human health, no matter what the risk. If we only did work to improve human health, we would not have most of the advances in science that we have today. One example is the biotechnology industry, and the recombinant DNA revolution, which emerged from the crucial discovery of restriction enzymes in bacteria – work that was not propelled by an interest in saving lives.

The results obtained from the study of the reconstruction of a 1918-like avian influenza virus are important experiments whose value is clear. They are not without risk, but the risk can be mitigated. It serves no useful purpose to rail against influenza virus gain of function experiments, especially without discussing the work and its significance. I urge detractors of this type of work to carefully review the experiments and what they mean in the larger context of influenza virus pathogenesis. I understand that the papers are complex and might not be easily understood by those without scientific training, and that is why I have tried to explain these experiments as they are published (examples hereÂ andÂ here).

In the next post, Iâ€™ll explain the gain of function experiments recently published by the Perez laboratory.

*Mayâ€™s objection is that the scientists carrying out the work are â€˜grossly ambitious peopleâ€™. All scientists are ambitious, but that is not what drives Kawaoka and Perez to do this work. I suggest that Lord May read the papers and base his criticism on the science. 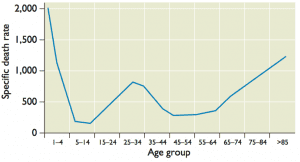 The 1918 influenza pandemic was particularly lethal, not only for the very young and the very old (as observed for typical influenza), but unexpectedly also for young adults, 20Â to 40 years of age (pictured). It has been suggested that the increased lethality in young adults occurred because they lacked protective immunity that would be conferred by previous infection with a related virus. Reconstruction of the origins of the 1918 influenza virus provides support for this hypothesis.

Analysis of influenza virus genome sequences using a host-specific molecular clock together with seroarchaeology (analysis of stored sera for the presence of antibodies to influenza virus) indicates that the 1918 H1N1 virus arose ~1915Â by reassortment of an avian influenza virus with an H1 virus that had previously emerged around 1907. The 1918 virus acquired the HA gene from the 1907 virus, and the NA gene and internal protein genes from an avian virus. This 1918 virus also infected pigs, in which descendantsÂ continue to circulate; however the human 1918 virus was displaced in 1922 by a reassortant with a distinct HA gene.

Seroarchaeology and mortality data indicate that an influenza pandemic in 1889-1893 was caused by an influenza H3N8 virus. This virus appears to have circulated until 1900, when it was replaced by a H1N8 virus (the N8 gene originating from the previously circulating H3N8 virus).

How do these events explain the unusual mortality pattern of the 1918 influenza A virus? High mortality among 20-40 year old adults might have been a consequence of theirÂ exposure to theÂ H3N8 virus that circulated from 1889-1900. This infection provided no protection against the 1918 H1N1 virus. Protection of other age groups from lethal infection was likely a consequence of childhood exposure to N1 or H1 containing viruses (this may also have resulted in the lower than usual mortality in the elderly population).Â InfluenzaÂ is typically highly lethal in very young children due to lack of immunologic memory.

These observations suggest that childhood exposure to influenza virus is a key predictor of virulence of a pandemic strain. Antibodies against the stalk of the HA protein protect against severe disease, but only within groups of HA subtypes (HA groups are determined by phylogenetic analysis). In 1918, antibodies against a group 2 HA subtype virus (H3) did not protect against severe disease caused by a group 1 HA subtype virus (H1). Childhood exposure mightÂ also determine mortality of seasonal influenza. For example, theÂ high virulence of currently circulating H3N2 influenza viruses in those older than 65 years might be a consequence of infection with an H1N1 virus at a young age.

The practical consequence of this work are clearly stated by the authors:

Immunization strategies that mimic the apparently powerful lifetime protection afforded by initial childhood exposure might dramatically reduce mortality due to both seasonal and novel IAV strains.