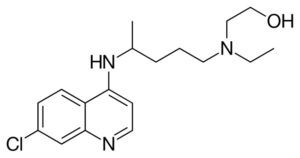 Chloroquine (and a derivative, hydroxychloroquine) has been used for years in the treatment of malaria. The drug is also known to block the entry of many viruses into cells. A small clinical trial has revealed it to be effective in reducing viral loads in COVID-19 patients.

Entry of enveloped viruses into cells requires fusion of viral and cell membranes to allow release of the viral genome into the cytoplasm. In many cases, after virus particles bind to cell surface receptors, they are taken into cells via the endocytic pathway. As these vesicles move toward the nucleus, their pH drops, which catalyzes fusion of viral and cell membranes. When cells are treated with chloroquine the pH of the endosome is elevated, which prevents fusion and blocks viral infection. The reproduction of many viruses is known to be inhibited by chloroquine.

The results of a clinical study conducted in Marseille, France to evaluate efficacy of hydroxychloroquine in treatment of COVID-19 were released on 18 March 2020. Patients included in the study were all over 12 years old and had laboratory-confirmed infection with SARS-CoV-2. They received 600 mg daily of hydroxychloroquine for ten days. Viral loads in nasopharyngeal wash were measured daily.

At the onset of treatment, the patients fell into three groups based on clinical presentation: asymptomatic, and upper or lower respiratory tract infections. Some patients were also administered azithromycin to prevent bacterial superinfection.

Upon study completion, twenty patients had received treatment and 16 were untreated controls. By day 6 of the study, 70% of treated patients no longer harbored virus as determined by RT-PCR, compared with 12.5% of controls. The combination of hydroxychloroquine plus azithromycin was more effective at clearing virus than hydroxychloroquine alone.

The authors write that â€œFor ethical reasons and because our first results are so significant and evident we decide to share our findings with the medical community, given the urgent need for an effective drug against SARS-CoV-2 in the current pandemic context.â€

Given the efficacy of observed even in this small clinical trial, it seems likely that hydroxychloroquine will be widely used in the treatment of COVID-19 caused by SARS-CoV-2. Whether azithromycin should be included remains to be determined. Either way, the use of hydroxychloroquine, a widely available and inexpensive drug, is a welcome advance in the treatment of COVID-19.