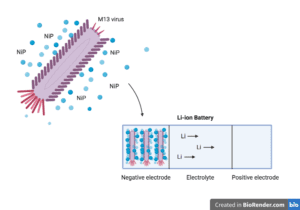 Microbatteries, like those found in electronic devices, need to have very small electrodes – usually on a scale of nanometers. This requirement makes them difficult to build, because any material used to construct the negative electrode typically expands to about three times its original volume when loaded with lithium ions, thereby undermining its use in a microbattery. Transition metals like copper (Cu), cobalt (Co), or nickel (Ni), are good electrical conductors and could be used as alternative components in electrodes when they are combined with phosphorus (P). However, the synthesis of these so-called metal phosphides is challenging, because some of their precursors are highly flammable and toxic.

But what does all of this have to do with viruses? In an unprecedented display of “thinking outside the box,” materials scientist Angela Belcher and her colleagues at MIT have shown that they can use viruses to power both the positively and negatively charged ends of a lithium-ion battery.

The authors reasoned that because M13 bacteriophages are long and narrow (about 880 nm in length and 6.5 nm in diameter), they can serve as biological scaffolds in the assembly of three-dimensional nickel phosphide nanostructures. Bacteriophages are viruses that only infect bacteria and are harmless to humans. M13 virus particles consist of 2,700 copies of a major coat protein that are helically wrapped around a DNA genome and four minor coat proteins at each end of the virus.

The team engineered amino acid changes into the major viral coat protein of M13 that increased its ability to bind semiconductor particles like metal phosphides. In particular, the authors found that viruses that displayed the negatively charged peptide sequence glutamate-glutamate-alanine-glutamate (E-E-A-E) strongly attracted nickel phosphide molecules. Mutant viruses displaying the E-E-A-E peptide were deposited directly onto titanium foil and crosslinked with glutaraldehyde, a stabilizing fixative. The resulting virus network was then exposed to a nickel-phosphorus alloy, allowing the viruses to capture the metal and produce “metallized” viral meshes of various virus/metal compositions. The metal portion of the compositions consisted of either NiP, Ni3P, Ni2P, or Ni5P4(compounds containing 1:1, 3:1, 2:1, or 5:4 nickel to phosphorous ratios, respectively). These virus-containing nickel phosphide nanostructures could then be used directly as freestanding negative electrodes in batteries. Viruses that were metallized with Ni5P4 had the thinnest dimensions and also displayed the highest capacity to conduct current.

These “virus batteries” have many advantages compared to conventionally produced batteries. They are more environmentally friendly because they’re made from non-toxic materials. Their synthesis requires relatively little equipment, so they are inexpensive to produce. They are lightweight and flexible and can thus be woven into fabrics, which makes them suitable for military clothing. They also have higher conductivity than conventional lithium-ion batteries, making them extremely useful for portable electronics, medical implants, and various aerospace applications. Eventually, they could even be used to power electric cars. How cool would it be to drive a virus-powered car?

However, Belcher’s ideas about virus-driven nanotechnology are not limited to lithium-ion batteries. She is also working on nanoparticles that act as probes for cancer cells. For this project, the viral DNA was engineered to express proteins that bind both carbon nanotubes and proteins produced by cancer cells. The resulting nanoparticles are designed to fluoresce at infrared wavelengths, allowing them to act as contrast agents in computed tomography scans, enabling the detection of very small tumors that are usually missed by other technologies. Belcher is also using the viruses to build biofuels, fuel cells, and solar cells with improved electron transport properties.

Viruses have many beneficial properties that are evident in both nature and in the laboratory. Belcher’s innovative approach is just one example of how these properties can be exploited to improve existing technologies or invent new ones.