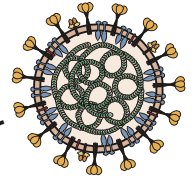 The complete genome sequence of this isolate was determined (29,891 bases) and comparison with genomes of other coronaviruses revealed that it is most closely related (96.2% identity) with viral RNA from a Rhinolophus affinis bat obtained in Yunnan Province in 2013. This finding means that both viruses have a common ancestor in bats. Recall that SARS-CoV also originated in bats. Many coronaviruses circulate in bats and more are likely to cross into humans in the future.

How the virus entered humans from bats is unknown. At the onset of the outbreak in Wuhan, it was suggested that transmission occurred at the Huanan Fish Market, because the initial infected individuals all had been in the market, which sells exotic meats as well as fish. However an epidemiological analysis of the first 41 hospital admitted cases indicates otherwise. Specifically, the first case, which occurred on 1 December 2019, had no contact with the Huanan Fish Market. Furthermore, none of the other 40 patients had contact with that first patient, and 13 had no contact with the Huanan Fish Market. There are two implications of these observations. First, the Huanan Fish Market was likely not the origin of the outbreak. Where the virus entered humans is currently unknown. It is possible that the initial infections occurred in a different market, or even outside of the city. At some point the virus might have been brought into the Huanan market from where it spread further. Analysis of wildlife products from markets for viral sequences might help pinpoint the origin of this zoonosis.

We do not know if the virus entered humans directly from a bat, or via an intermediary animal, such as palm civets which were involved in crossover of SARS-CoV from bats.

The second implication of the epidemiological observations noted above is that the first infections did not occur on 21 December, as previously reported, but much earlier. The first patient on 1 December was likely infected during November. The virus might have been circulating as early as October, as suggested by evolutionary analysis of genome sequences from multiple patients. The virus could have been causing cases of pneumonia even in November, which were overlooked in the background of this disease observed in winter months. More extensive spread of the virus earlier than previously thought could account for the sudden surge of cases in January.

How transmissible is infection with 2019-nCoV?

Preliminary studies based on the first 425 confirmed cases have placed the reproductive index, R0, at 2.2 (range 1.4 to 3.9). The R0 is the number of people, on average, who are infected by a single infected person. In comparison, the R0 for SARS-CoV was about 3. Outbreaks can be halted when the R value is brought to less than 1. Transmissibility is determined by the length of time that a virus-shedding patient has contact with other patients. Rapid identification and isolation of infected patients can shorten this period and lower the R value.

In SARS-CoV infected patients, virus shedding largely coincides with the peak of disease symptoms. Given the severity of the disease, many patients were in hospitals and transmitted the infection there. Consequently patient isolation and infection control were essential for halting the outbreak. There appear to be many more mild infections with 2019-nCoV, and there is greater chance for community spread of infection versus hospital spread. Community acquired infections, such as influenza, pose a great challenge for control. Identifying every infected patient to break the chains of transmission will be difficult.

The relationship between disease severity and transmission is nicely summarized in this article:

â€¦if this virus transmits efficiently, its seemingly lower pathogenicity as compared with SARS, possibly combined with super-spreader events in specific cases, could allow large-scale spread. In this manner, a virus that poses a low health threat on the individual level can pose a high risk on the population level, with the potential to cause disruptions of global public health systems and economic losses.

We do not yet know whether 2019-nCoV is transmitted to other individuals during the incubation period – the time before disease signs and symptoms appear. If it is, it will make control even more difficult. The mean incubation period has been estimated at 5.2 days (range 4.1 to 7.0), supporting the use of a 14-day observation or quarantine period for individuals who have been exposed to infection.

Can infection be prevented or cured?

A number of experimental vaccines for 2019-nCoV have been announced, but it is unlikely that they will be available to halt the current outbreak. Nevertheless, they should be pursued should the virus become endemic in humans (unlike SARS-CoV, which has not been seen since).

Antiviral drugs would be useful for treatment of very sick patients. Remdesvir, a nucleotide analog with potent antiviral activity against a wide range of RNA viruses, including ebolaviruses, MERS-CoV, and SARS-CoV, should be tested for efficacy against 2019-CoV. It has been shown to be superior to a combination of lopinavir, ritonavir, and interferon beta, which is being evaluated for treatment of MERS-CoV and 2019-CoV infections in humans. With multiple 2019-nCoV virus isolates available, it will be possible to test other existing antivirals or identify new ones.

The CDC estimates that so far this season (in the USA) there have been at least 15 million influenza illnesses, 140,000 hospitalizations and 8,200 deaths from the disease. There are no travel bans in place to prevent spread of seasonal influenza. Those in place in China, and being considered elsewhere, are an attempt to halt the global spread of 2019-nCoV. I doubt they will be effective, as the virus has already spread to 21 countries outside of China, and it is very difficult to prevent the travel of every infected individual. The question now is how extensive the epidemic will be. Will it reach the extent of pandemic influenza? (in 2009, 60 million cases in the US alone). What will the case fatality rate be? (It was 0.02-0.4% for 2009 H1N1 influenza virus, 9.5% for SARS-CoV.) It is too early to answer these questions, but we learn more every week.