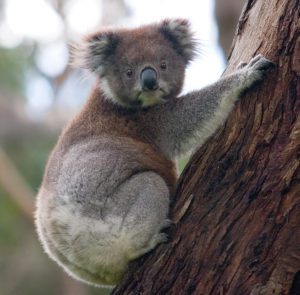 Australian koalas are currently being invaded by koala retrovirus A (KoRV-A), a virus that causes an AIDS-like immunodeficiency and makes infected koalas more susceptible to cancers and opportunistic infections such as chlamydia.

Retroviruses owe their name to their replication cycle, because their RNA genomes are reverse transcribed into DNA which is then inserted into the host genome. This mechanism opposes the central genetic dogma, which dictates that RNA should be translated into protein. Transcribing the RNA into DNA is going “backwards” relative to the central dogma. Once the retrovirus DNA is inserted into the host genome, routine transcription of the host genome results in transcription of the inserted viral genome. The resulting viral transcript can be reverse transcribed into a new DNA copy, which is then re-inserted at a new place in the host genome. This phenomenon of “jumping” from one genomic site to another is similar to that exhibited by mobile genetic elements called transposons. However, unlike retroviruses, transposons encode an enzyme called transposase, which allows them to jump from one site to another through a cut and paste mechanism without the need for an RNA intermediate. Because retroviruses jump using an RNA intermediate, they are often referred to as “retrotransposons.”

Transposons and retroviruses often move around at the expense of host genome integrity, because they can frequently end up in the middle of a gene or in regulatory regions, thereby destroying the gene or altering its transcription. This disruption of genes can be catastrophic, particularly if the damage occurs in germ cells and is transmitted to future generations.

So why is DNA damage by transposable elements not more common in animal cells? As it turns out, a genomic patrol system consisting of small non-coding RNAs known as Piwi-interacting RNAs (piRNAs), can detect and prevent transposition of DNA.

Piwi proteins (named P-element Induced Wimpy testis in the fruit fly) are members of the Argonaute protein family, a crucial component of the RNA-induced silencing complex, which silences RNA using RNA interference mechanisms. Argonaute proteins bind different classes of small non-coding RNAs, including piRNAs, and the resulting complexes silence transposons and other repeat-derived transcripts by base pairing with them, cleaving them, or inhibiting their translation.

It is presently unknown how piRNAs are activated in response to actively transposing elements. However, the ongoing outbreak of KoRV-A in koalas is helping scientists shed some light on this mystery. In a large collaborative effort, a group at University of Massachusetts Medical School analyzed the genomes of four recently deceased koalas to determine the mechanisms that protect the genetic integrity of this species.

First, the authors compared the sequences of integrated retrotransposons in the four koala genomes (referred to as “experimental” genomes) to an existing sequence of a koala genome (referred to as the “reference” genome) to see if any of the transposons in the four koalas were recently active. Variation in insertion sites between individuals indicates whether transposition events are recent in evolutionary time. In other words, if transposons are in different locations in different koalas, that would suggest that they moved around recently. In contrast, if insertion sites are shared among individuals, it would suggest they moved around a long time ago in a common ancestor and then stopped moving. Based on this analysis, the authors found that the KoRV-A virus and three other endogenous retrotransposons are currently actively transposing in the koala germline. However, they also found that while the endogenous retrotransposons are active in both somatic cells and germ cells, their activity is drastically reduced in germ cells, which is the site of piRNA activity.

Genomic regions that give rise to piRNAs typically occur in clusters of multiple piRNAs, which can be located between genes (“intergenic clusters”) or within genes (“genic clusters”). Transposons or retroviruses can insert into these clusters or randomly elsewhere in the genome.

To determine which genomic regions give rise to koala piRNAs, the authors compared the sequences of one experimental koala genome to the reference genome and found remarkable similarities between the piRNA clusters in the experimental genome and the reference genome. In short, koala piRNAs seem to be produced from a combination of retroviral insertions into genic and intergenic clusters and other isolated transposon insertions, which is similar to what has been shown in other mammals.

Retroviral transcripts that are translated are typically spliced to remove intergenic regions before export to the cytoplasm, where they are translated. Full length transcripts do get to the cytoplasm, and they are packaged into new viral capsids. piRNAs produced from intergenic clusters could only result from unspliced (full-length) transcripts. Both the positive and negative strands of intergenic and genic clusters can be processed into piRNAs, resulting in sense and anti-sense piRNAs, respectively. However, since transcribed transposons or retroviruses consist of mRNA, which has a sense polarity, they can only be silenced by an antisense piRNA. Interestingly, the authors noted that most KoRV-A piRNAs produced from the experimental genomes had a sense polarity and that they were preferentially derived from unspliced transcripts, a phenomenon that seems to be conserved with established retrotransposons in other species.

The preferential processing of unspliced proviral transcripts into sense piRNAs is not based on identification of the genome sequence. The authors speculate that the unspliced transcripts carry some sort of signature similar to pathogen-associated molecular patterns (PAMPs) recognized by vertebrate innate immune elements. The authors suggest that the piRNA response occurs in two phases that are comparable to the vertebrate innate and adaptive immune responses. The production of sense piRNAs in response to a putative PAMP-like signature in unspliced transcripts is nonspecific and comprises the innate genome immune system. Because the viral transcripts are destroyed, the number of surviving germ cells increases. These cells contain proviral insertions from which antisense RNAs are transcribed. These in turn are processed to produce antisense piRNAs that base pair with viral mRNAs, leading to their degradation and silencing. This sequence-specific recognition comprises the adaptive genome immune system and triggers a cyclical amplification of piRNAs to increase the number of piRNAs that can silence transposon mRNAs. The presence of a transposon in a piRNA cluster would trigger a particularly rapid adaptive immune response, causing the transposon to become defective and obsolete, like most endogenous retroviruses in our genomes.

Although vertebrates are thought to have abandoned RNA interference-type immune responses, this work provides a glimpse into a possible ancient RNA interference-like pathway in the mammalian germline for both innate and adaptive genome immune responses. This study also suggests that although retroviruses are currently infecting koalas, piRNAs are protecting their germline from invasion by new viruses and transposition by established viruses; allowing them to survive, reproduce, and possibly avoid extinction.

KoRV was previously reviewed here and here. For a discussion of the paper described in this post, check out TWiV 571.