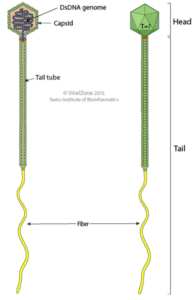 Viruses that infect eukaryotic cells typically bind to a plasma membrane receptor to initiate the reproduction cycle. Attachment of bacteriophages to bacterial cells is more diverse. Some attach to bacterial outer membrane proteins, while others attach to appendages such as pili or flagella. How viruses move from the flagella to the bacterial cell surface is revealed by studies of a flagellotropic bacteriophage that infects Salmonella.

Members of the virus order Caudovirales consist of an icosahedral capsid that contains the viral dsDNA genome and a tail through which the DNA moves into the cell. Bacteriophage lambda is perhaps the best known member of the Siphoviridae (a family within the Caudovirales), which have long, non-contractile tails that attach to receptors in the bacterial outer membrane. In contrast, phages that infect Salmonella enterica, known as Chi phage, bind to flagella via a flexible filament that is attached to the end of the tail (illustrated).

How Chi phages move from the flagella to the bacterial outer membrane is not understood. Originally it was proposed that the phage DNA is injected into the flagella, from where it moves to the host. This hypothesis is not correct as there are no gaps between the flagellin protein subunits to allow DNA to enter.

The study of a newly isolated Chi phage of Salmonella entericaÂ serovar TyphiÂ reveals a different mechanism for how the virus delivers its DNA to the bacterium. This phage attaches to the flagellum via a protein called YSD129. The atomic structure of this protein reveals that it has the shape of a corkscrew. This observation has led to the suggestion that the protein binds flagellin and rotates in the groove that is formed by the flagellin subunits. Imagine the phage binding to flagella via the flexible tail, then corkscrewing around the rotating flagella, with each turn moving closer and closer to the bacterium.

Now whenever I insert a corkscrew into a cork I will think of phages surfing flagella to reach the bacterial host.