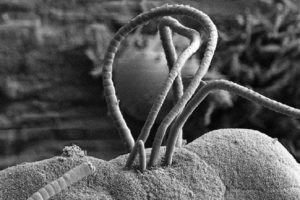 Viruses and bacteria are both present at mucosal surfaces and it is not surprising that they interact in many ways. Sometimes members of the gut microbiome help viruses to infect cells, exemplified by poliovirus, reovirus, and mouse mammary tumor virus. The opposite also happens: segmented filamentous bacteria can prevent and cure rotavirus infection.

Mice that lack B and T cells (Rag1-knockout mice) develop chronic infection after oral inoculation with rotavirus, which causes gastroenteritis in humans. While breeding these mice at Georgia State, a line was obtained that was resistant to infection. Resistance to infection could be transferred to the original Rag1-knockout mouse line by co-housing or administration of feces from resistant mice. These observations suggested that a transmissible microbe is present in feces of mice resistant to rotativirus.

A single species of bacteria, Candidatus arthromitus or segmented filamentous bacteria (pictured), were found to be responsible for resistance of Rag1-knockout mice to infection with rotavirus. The bacteria were apparently introduced into the original Rag1-knockout mice during breeding at Georgia State. The bacteria prevent infection in at least two ways: by altering the gut epithelium, causing increased shedding of infected epithelial cells, and by interacting with virus particles to prevent infection.

These findings suggest that other commensal bacteria might prevent virus infections, a possibility that deserves careful study to not only reveal mechanisms of infection but to suggest new antiviral approaches.